The Ghenghis Khan Highway, Ulan Bator, Mongolia. It’s not your standard postal address but will soon be Cele Stone’s, at least for a while.

The Mogendoura horsewoman is set to compete in two of the world’s great endurance events – the Mongol Derby and the Gobi Desert Cup – racing Mongolia’s native ponies across thousands of kilometres of steppe and desert. Cele said she was the last applicant accepted into this year’s Mongol Derby.

I think only one person has died.

There was a lot riding on her acceptance, “I couldn’t keep on drinking more, eating more, caring less. I had to choose; choose to live or choose to die. I needed something big enough –  scary enough! – to get me off the couch … The Mongol Derby is that.”

The 40 odd competitors in the 1000 kilometre horse-race need to ride a minimum of 100 kilometres each day. “We change horses at each station, every 40 kilometres, where there are gers with food for riders,” Cele said. Each rider wears a tracking device and can only ride between 6.30am and 8pm.

"I have that up my sleeve over the younger and fitter riders."

“You choose to stop at the ger, or go on. If you have a half-hour before 8pm, you can gallop on and camp out for the night. I want to have fun on the way, meet people, get the whole experience.”

Don’t be mistaken, although Cele said a lot of luck’s involved: “I don’t think anyone enters without thinking they might win. I will definitely finish, no doubt about that.” Usually, half the field doesn’t finish; accidents and injuries are common, upset tummies and travel flu too.

“I think only one person has died,” Cele said.

It was a death – her partner’s – which eventually led Cele to Mongolia. “Michael died in February, 2017,” she said. “He’d been unwell, then got very sick and went to hospital; they gave him two months.”

We dressed him as he wanted, put the casket on the back of the ute and drove him to the crematorium.

For several years, Cele had also cared for her elderly mother. “I nursed Michael at home and mum moved into nursing, though sometimes they would be in hospital at the same time – different ends of the hall and I would just shuffle between.”

“Michael died at home,” Cele said. “My brother had made his casket, it was sitting there on the verandah. We dressed him as he wanted, put the casket on the back of the ute and drove him to the crematorium.

“I miss him, he was my best mate. He made me laugh so much, he was a funny person … I’d had a complete life, then I was a carer, and then not a carer. I didn’t have a strong will to keep going.

“I really was thinking about suicide all the time. Every day. We don’t talk about grief much – people aren’t comfortable with it. It’s a tidal wave that knocks you down. You surface and catch a breath but the next wave knocks you down again. Those waves keep coming. Over time you learn to take bigger breaths.”

That night was a changing point. I lay in my car and all my fears descended.

Cele’s cousin took a round-the-world yacht trip, an old school friend turned up on Australian Survivor. Could the Mongol Derby be Cele’s chance to surf those waves?

“I like the ocean but I like horses more, so I Googled ‘horse adventures’. I stopped drinking and started going to the gym.I started riding my horses but it wasn’t enough, so I started riding other people’s horses.”

It still wasn’t enough, so Cele took up the sport of endurance riding.

Cele has since entered another 40 kilometre ride and several of 80 kilometres, and things have become easier. Mostly. 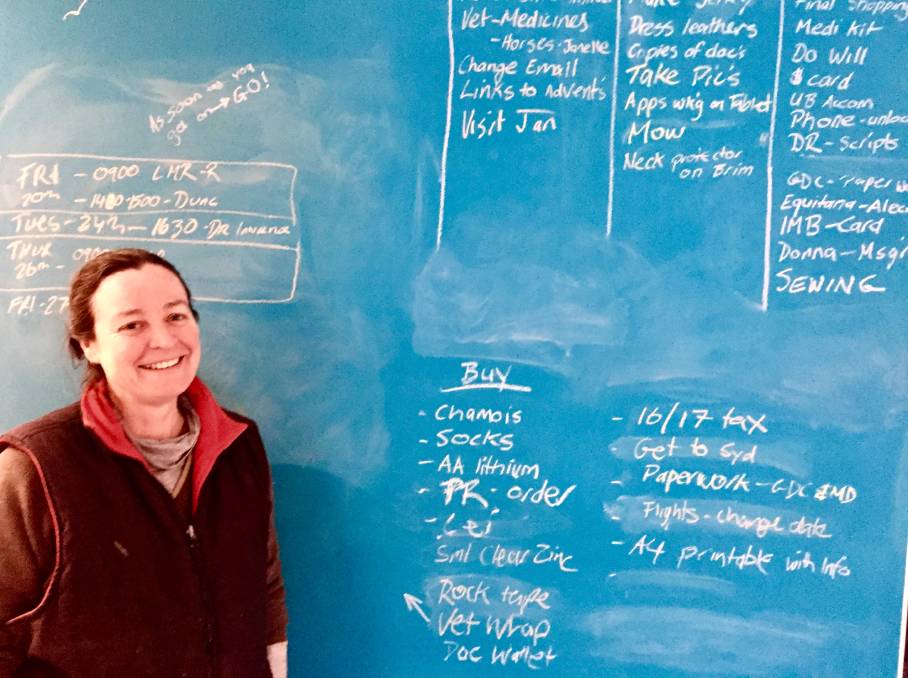 Cele Stone and the massive board she has installed at home to help plan her Mongolian adventure.

“My own quarterhorse hardly budges when a balloon pops under his feet; these Arabian endurance horses are full of go and shy at everything. Just getting on one is way out of my comfort zone.”

Cele said there had been moments of fear. Exercising one horse the day before a competition, her very feisty mount made her feel unsafe – she got off. “That night was a changing point. I lay in my car and all my fears descended: fears about the Mongol Derby, even about getting on the horse the next day. I wasn’t actually shaking, but almost,” Cele said.

“You have to move through those fears – otherwise they sit there and you live your life around them: I woke up, hopped on the horse and rode. That horse was fabulous.”

Just weeks before she sets off to Mongolia, Cele has faced another, greater challenge.

I just cried, overwhelmed with grief.

“I went up to the Queensland, as I couldn’t find an endurance ride closer to home,” Cele said. She had done the first 40 kilometres and was preparing her horse for the second – “I remember clearly, I was due out at 11.37am” – when the text came through: her mum had passed.

“Mum had been sick for so long. She had gone out for her morning ciggy – 88 and still smoking! – come in for a cup of tea. The nurse noticed she had gone because her head slid back slightly in her chair, really peaceful, really quiet … I just cried, overwhelmed with grief.”

Cele said every time she is forced out of her comfort zone she is rewarded; meeting really great people, facing fears and working through them, and developing mental resilience. She plans to put that mental resilience to good use in the Mongolian races.

“I feel I have that up my sleeve over the younger and fitter riders,” Cele said.

“After all this, Mongolia should be a doddle. I can just get on the horse and ride!”

As a part of her Mongol Derby adventure, Cele is raising money for the charity Cool Earth. You can donate at her fundraising page. All profit from the Gobi Desert Cup goes to the purchase of land for and building of the first equine hospital in Mongolia, and, later, providing scholarships enabling Mongolian students to qualify as veterinarians.

Discuss "From Mogendoura to Mongolia"

Discuss "From Mogendoura to Mongolia"