Ice has "smashed apart" Michelle Preston's family, with the impact of addiction so terrible on her only son that she fears he may not last the winter.

But the South Coast mother is turning her pain into power in order to help others in the same situation.

Ms Preston has joined forces with another mother, who cannot be named due to legal reasons, to form a support group for parents, grandparents and others devastated by a loved one's ice addiction.

Their Facebook group 'Ice - turning family pain into power' now has more than 1000 followers, and the women have also shared their personal experiences through school presentations, and at drug and alcohol forums.

The pair also shared their experience to help inform the NSW Government's Special Commission of Inquiry into Ice when it visited Nowra in late May.

Their submissions were made during a private hearing, and have only just been made public. And they make for harrowing reading.

"My son has been a substance abuser for 11 years and got onto ice about nine years ago," Ms Preston told the inquiry.

"He is in early stages of recovery but is desperately unwell. He was diagnosed with schizophrenia about four years ago and has developed a cyst on his front temporal lobe due to ice use which affects his decision making and ability to communicate clearly.

"He is homeless and I don't think he is going to make it through winter."

Ms Preston, a mental health peer support worker, is the official carer for her son.

However for her own safety she cannot provide a permanent home for him, so he camps just outside his hometown of Narooma, walking barefoot along the highway with his dog to get anywhere. 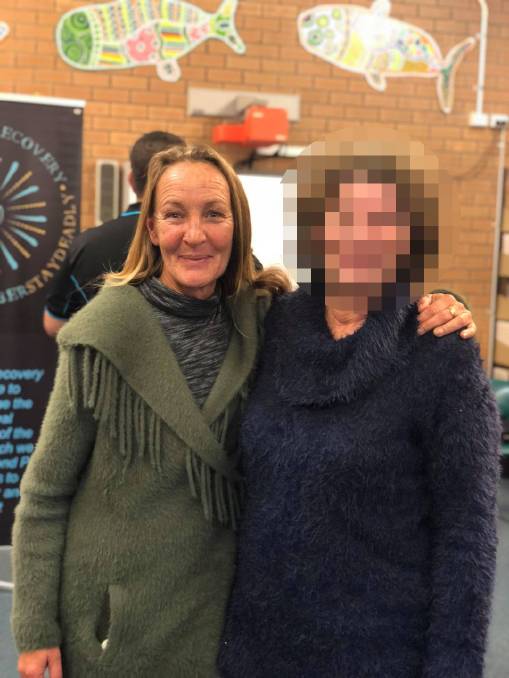 Women's mission: Michelle Preston and another mother, who cannot be named, are providing support to other families struggling with a loved one's ice addiction.

If he's stable, she'll let him stay - yet if he is using or in an "aggressive phase" of his mental health condition, she has to make the hard decision to ask him to leave. Sometimes she's needed the support of authorities to make that happen.

"Ice has smashed my family apart. It is hard to connect with my family as it has affected us all. We can't have a family dinner because there is so much pain between us," she said.

"I can't live with (my son). I don't feel safe in my house with him. It goes against every maternal instinct I have but he is schizophrenic and I need to keep myself safe.

"On one occasion I came home from visiting my parents in Canberra and (he) had put knives in every wall in the house and said they looked good."

I came home and he had put knives in every wall in the house and said they looked good.

There are glimmers of hope, and Ms Preston recently saw her son smile - for the first time in years.

"Sadly I remember the dates I see my son smile," she said.

"More recently I was discussing with him how he was going to get through winter. It was a normal conversation on the Friday, but on Saturday morning his entire demeanour had changed.

"It's a constant rollercoaster in terms of what he's going to be like on any given day."

The 51-year-old said her son started using drugs at 17, using marijuana and cocaine before getting hooked on ice.

"I wouldn't see him for days after he started on ice," she said. "There was emotional manipulation, gas lighting and blaming everyone around him. He then developed psychosis and I had to get him scheduled."

Her son has been involuntarily scheduled eight times; he's also been charged over drug possession, and spent a total of 15 months in jail.

Ms Preston told Commissioner Dan Howard there was a lack of residential rehabilitation services available on the South Coast - which had led to a number of "homeless camps" all the way down the coast.

"Whenever he is released from psychiatric care, he is released into homelessness," she said. "...That's my issue with the mental health system, there is no wrap-around support."

Stigma too is a major issue, and it took Ms Preston two years to talk to anyone about her son's drug use.

"Pushing through the stigma is so hard," she said. "I now hold my head high in my small community but in the past I avoided social situations just so I didn't have to explain my world."

Ms Preston also told the ice inquiry there was a need for better wrap-around support and peer support.

"I come from an upbringing where we never leave a family member behind no matter what, and as long as I have breath in me I will advocate for my son and shared my lived experience with others to help them through the nightmare," she said.

The woman who joins her in running the support group also has a shocking story.

The 59-year-old's son is in jail and she has custody of her grand-daughter and two half brothers as their mother is an ice addict. One of the little boys was born addicted to ice.

"The youngest boy was a very sick little baby. During the time he was drying out he had a stroke," she said.

"...There has not been a lot of research conducted regarding ice-addicted babies or children and the short and long term health and behaviour outlooks."

Her son wasn't using ice when she got custody of the children - he picked up that habit in jail, although she said he isn't using now.

She said there needed to be more support for relative and kinship carers - who had to step up when ice use broke families apart.

The ice inquiry has held public and private hearings in Nowra, Lismore, Maitland and Dubbo - and is being held in Broken Hill this week. A final report is expected late this year.