The members of the Narooma Croquet Club looked very smart when they turned out in their new uniforms on Thursday for the first playing day in July under the easing of coronavirus restrictions. The scene was set on the beautiful greens of courts 1 and 2, at the Dalmeny Club where there were ten matches of golf croquet played with three games decided on the last red hoop. Di Sims was outstanding with great follow through on her strokes to just fail by one point to win all her games while the best player on the day was Janet Jones with three wins and 21 points. Details of the scores were as follows: 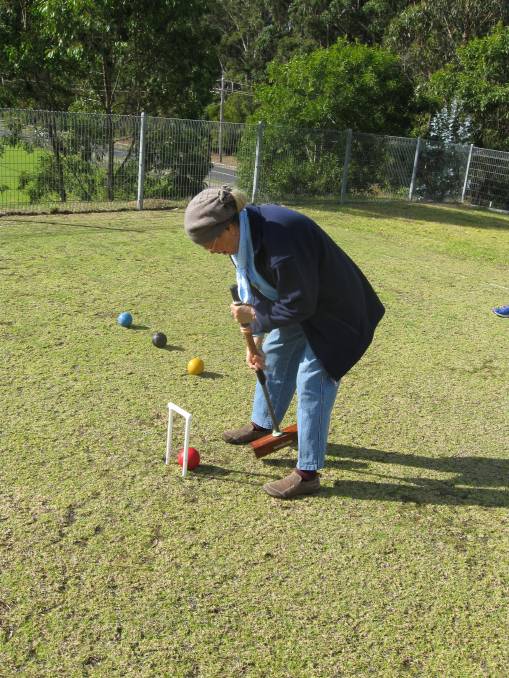 Aurelia Robinson a picture of concentration as she scores with the red ball.

Association Croquet, June 30: Tuesday's game was a competitive and see-sawing singles match between Pauline Wilcock and Len Favier. It was neck and neck for two hours until Pauline finally got the upper hand in the last 15 minutes to win with the final scores, Pauline 17 to Len 11.

The first day of the Golf Croquet Doubles Handicap Championship is on today, July 8. Please book with Fay O'Connor 0421 352 527 and keep to COVID-19 protocols. 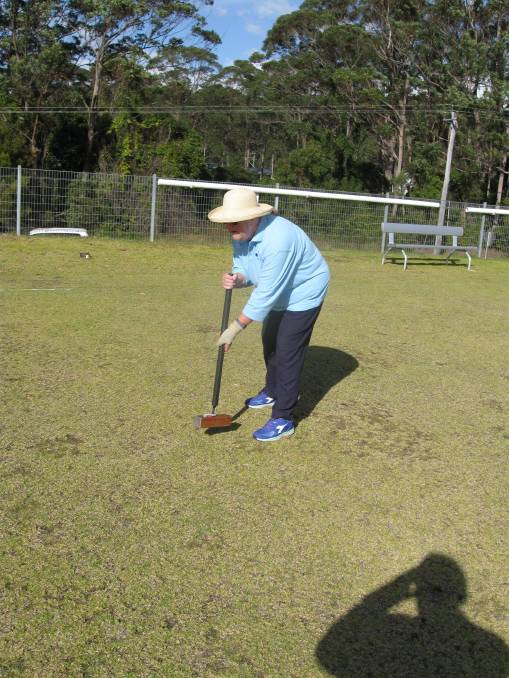 Thursday, July 2: Again a good field of 138 players enjoyed very pleasant conditions and continued to play at an improved rate, for which they are to be complimented. A Grade was taken out by David Bennett with 37 points off his handicap of 3, followed by six players on 36 points. The countback favoured Bill Swan and Phil Haynes with Peter Ward, Paul Stokes, Richard Goodridge and Bill Durnan missing out. In B Grade Greg Riley was a clear winner with 40 points off his handicap of 14,with Kevin Seamons and Peter Elliott following on 37 and 36 points respectively.

In C Grade, Steve Marsden posted the best score of the day with 41 points off his handicap of 21, one better than Graham Tasker on 40 points. Ross Giblett continued his recent good form with 38 points to take third place on countback from Troy Beecham. The ball competition went down to all on 31 points.

Saturday, July 4: A field of 150 players continued the excellent pace of play and again deserve recognition. In A Grade two-time Seahorse Classic winner Harrison Savage from Neangar Park posted a one-under par score off 38 points off his handicap of 1 to win on countback from Jim Grant. Will Monteith took third place with 37 points on countback from Phil Haynes and Graham Cron from Catalina. B Grade saw the best score of the day when Paul Davey registered 41 points off his handicap of 16 , one better than Mark westwood on 40 points. Tony Hunt filled third place with 38 points on countback from Ross Giblett. C Grade saw a five-way countback on 37 points to decide the placings. The spoils went to Garry Schmidt off a handicap of 24, Blake Thornhill and Mark Lonsdale, with Alan Chisholm and Graham Tasker missing out.The ball competition again went down to all on 31 points. 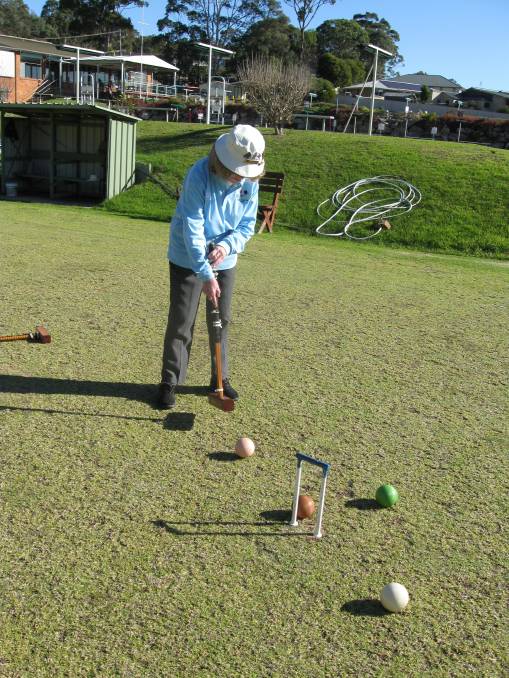 Louise Starkie plays the pink ball to move the brown ball from the hoop.

On Wednesday there were 6 rinks of triples and 1 rink of pairs with winners decided by the highest winning margin. First place went to Scott Kennedy, Tony Cobcroft and Neville Butt (skip) who led throughout for a good win against David Shackleton, Jeff McCusker and Ray Gale (skip). Second place went to Peter James and Tony Gors (skip) who led 26 to 14 after 15 ends and continued to keep their opponents at bay to run out 34 to 21 winners over Peter Hawker and Peter McKay (skip).

On Saturday, there was a great turnout with winners decided by lowest winning margin. First place went to Vince Stokes and Garry Evans (skip) who had a close game throughout and they were 21 all after the 24th end before picking up 1 shot on the last end for a 22 to 21 win against John Voytas and Les Waldock (skip). Second place went to Bill Turnbull, Paul Naylor and Kevin Callaway (skip) who were down 4 to 11 after 9 ends before they picked up the pace to runout 23 to 18 winners over Craig Campbell, Carl Lee and Shorty Smart (skip).

It was a wonderful afternoon of bowls on Sunday, with 32 bowlers enjoying another wonderful Narooma afternoon. Winners were decided by lowest winning score with first place going to Di Fry, Sue Bender and Sandra Breust (skip) who were all square on 4 occasions before they drew clear to take the match 17 to 14 against Allison Maloney, Darrell Goodridge and Ken Burrows (skip). Second prize went Ella Breust and her dad John Breust (skip) who led 15 to 10 after 15 ends and kept their nose in front for an 18 to 15 win against Betty Greenshields and Barry Lymbery (skip).

In the one Round 2 Singles match completed over the weekend, Keith Pickett played Greg Ryan. The game was tight early on with the scores level at 6 all after 6 ends and 10 all after 11 ends before Greg started to draw clear to lead 18 to 10 after 14 ends. Keith came back to trail by 2 shots after 19 ends but once again Greg drew away with some top bowls and he continued on to take the match 31 to 21. Coming Events: Third round matches in the Major Singles are due to be played on or before Sunday.

Although a bit chilly, it was a beautiful sunny day for two games of triples and one of pairs. The lucky rink drawn out was four, where a great game was enjoyed.

Early on Betty Greenshields, Sue Bender and Barb McNamara (skip) led, but scores were nine all at 11 ends after some good bowls by Heather McGourty, Pam Grant and Jean Vos (skip). Increasing the pressure, Jean's team picked up 5 shots to hold the lead by three after fifteen ends, but the final bowl on end eighteen decided the result - a one shot win to Barb's team, who happily collected the day's prize. Di Fry was also a winner, taking home the fruit tray raffle. Best wishes went to Vena Butt, for her Birthday last Thursday. Club Pairs entry sheet is on the noticeboard. Round 2 of club singles to be played on 16 July. AGM nominations close, July 21.

Saturday, July 4: Allen Lee brought his best game to the Tuross Head Country Club golf course on Saturday, winning the stableford competition, with a score of 35 points. Allen was followed by David Schmid, Paul Medwin, Kane Duncan and David Dow who all finished with 34 stableford points.

Golfers are now seeing an easing of the restrictive social rules at Tuross Head and can now attend and enjoy the after match presentation inside the clubhouse. The match entry times can now also be accessed by logging into the Golf Magic console in the sports bar. The Tuross Head Thursday Medley stableford competition is attracting an increasing number of golfers each week and it was pleasing to again see lady players featuring on the awards list. This event is attracting golfers who are seeking another outing, outside their usual men or ladies sub club weekly competition. Nigel Barling emerged as the winner this week with 40 points edging out Leonie Doolan on a countback. Ian McManus filled third spot with 38 points followed by Kath Gannon and Jennifer Gray who both scored 37 points. Jim Wade, Bruce Martin and Desmond Jackson all returned cards of 36 points.