The departure of three BlazeAid coordinators has spurred new calls for volunteers at sites in Cobargo, Bemboka and Towamba.

The three camps, which have formed something of a micro community of like-minded people with a drive to help others, are just shy of 50 per cent capacity, says coordinator Stuart Beazley.

"The camps have a combined capacity of around 150 - and we're probably at 60 or 70 volunteers," Mr Beazley said.

"We've been able to replace the three coordinators that have finished up, but who will replace the replacements? That's the situation we face."

Cobargo coordinator Jess Suttle and Bemboka coordinator Katie Kim, who has been working with her husband Hae Young Kim, are both working professionals from Britain and have been in the area for around six months.

Fellow volunteers spoke highly of Ms Suttle as she wrapped up recently.

"Her smile and positive attitude have been a constant at the camp and on the fence lines through changes and challenges, sunshine and some rain," the volunteers said.

"Always clad in her signature gumboots, Jess could brighten up a fenceline with a random dance move or yoga stretch, and always a wise word.

"We will miss her greatly."

Meanwhile, Ms and Mr Kim began in Cobargo around April and played a key role in founding the Bemboka BlazeAid camp in May, spending the last five months helping rebuild fences for properties in the area.

In Bemboka there had been a sentiment of playing second fiddle to other fire-hit areas and Ms Kim said BlazeAid's efforts were important to the area.

"Essentially here in Bemboka they have been waiting quite a long time to have their fences replaced," she said.

"[When we arrived] it was quite sad to see, there was a kind of consensus of 'are they here to help? Are they going to stay?'"

Ms Kim said recently the camp had room for almost 15 more volunteers and help would be valued with about two thirds of refencing still to be done. 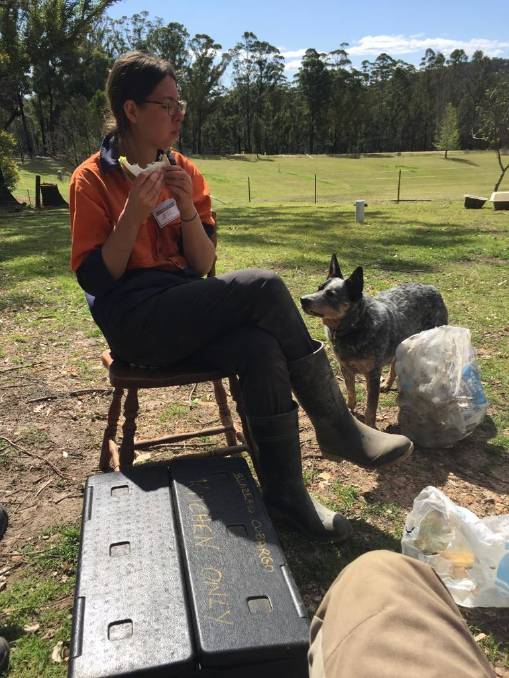 Jess Suttle, pictured enjoying a sandwich, is one of three BlazeAid coordinators that have finished up in Cobargo and Bemboka.

"We are 33 per cent of the way of being able to finish all the properties that have registered with us, so an extra boost of people could give the community that support," she said.

"We have a capacity of 28, but because of COVID and everything that has happened we fluctuate between 10 to 15 people and need extra to come and fill that gap.

"From our point of view we're doing things, but it's not as fast as we would like it - we want to be able to get as many properties completed as possible for the community."

Mr Kim said volunteers could take away enormous spiritual satisfaction of having helped people and the BlazeAid camp had become a melting pot of international support.

"There are eight nations that represent us currently," the couple said, with volunteers from Norway, Korea, Germany, Thailand, Britain, New Zealand, Australia and even a Swedish-Mandaean.

Since speaking with Australian Community Media, a Swiss-Canadian volunteer has also joined the mix.

Mr Kim said after the COVID-19 outbreak there had been a bit of panic internationally and the volunteers' families had urged them home.

But it emerged that regional Australia was handling the pandemic better than many other countries and the conversation quickly shifted to the experiences and accomplishments the volunteers were making with the community.

"We're all professionals in our own countries and we've got jobs and careers, but we wanted to make a difference," Ms Kim said. Hae Young Kim and Katie Kim sent their regards to the Bemboka camp after wrapping up on Wednesday.

"Coming here and doing something, you're getting to know the locals who need the help and you're making a complete difference to other people's lives."

Mr Kim said they had already planned to visit Australia when the fires started with the couple picking fruit for around a month before they shifted to the Cobargo BlazeAid camp.

"When it was transpiring we were in the UK and we moved to Australia for a vacation, but we didn't know the power of these fires before we saw it with our own eyes," he said.

"And we knew we could do some good, rather than just fruit picking; you're actually bringing a good experience to people who need it."

The couple said international work visas meant visitors had to do 88 days of regional work to qualify for their one-year visit, but many in the camp had given up five or six months to help.

"We came to this camp specifically and set it up not needing our visa days," Ms Kim said.

"We'd already completed those two months before, but we needed to be here and do this."

Tragically, the couple said COVID-19 had broken out almost immediately after the fires and people in fire-affected areas had little opportunity to express their trauma before lockdowns.

They said it has left many isolated and just trying to get on with things, and now as the weather warms up once again the couple are hoping more volunteers will get on board to finish the fencing projects before another summer bushfire season.

"BlazeAid staying here and being here is able to support people rather than just abandon everyone again.

"[The memories] are more suppressed in their minds, people are just getting on with it and they just need a little bit of extra support."

Mr Beazley echoed the sentiment across all three sites around the Bega Valley.

"There is the nervousness about new fires - but it's heartbreaking to have the facility there and people needing the help, we just need the boots on the ground," he said.

A list of 530 properties registered for fencing help in Cobargo with about 100 of those projects now finished, while in Towamba and Bemboka about two thirds remains to be done with about 60 properties at each camp needing help.

"We've got a number of other roles in the camp that are useful for people to come and fill," he said.