If there's one thing Aussies love, it's a good old barbecue. But with so many of us likely to be spending more time at home and entertaining friends and family this summer, it's time Aussies learnt the tools needed to elevate the classic barbie to something extra special and extra tasty.

For more of the Beef BBQ Squad's delicious recipes or to find more information on cuts and other recipe ideas head to www.australianbeef.com.au 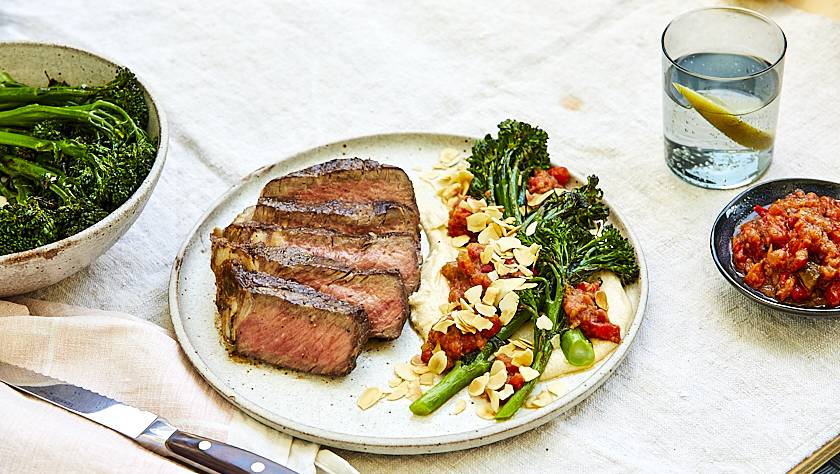 1. Toast almonds in a pan or oven till nicely amber in colour and soak overnight in 250ml water.

2. Take sirloin out of the packet and leave uncovered overnight or 24 hours on a rack in the fridge

1. Take the steak out of the fridge, oil with a little canola oil and season with salt and pepper using a three parts salt to one part pepper ratio.

2. Drain the soaked almonds over the crusty bread leaving the bread to soak in the juice and the vinegar.

3. Blend the almonds in a blender for 30 seconds and then add the soaked bread, leftover soaking mixture, garlic, lemon and salt. Blend all ingredients for one minute. Once combined, add the oils to emulsify into a chunky puree. Taste for seasoning and zing. Cover and set aside.

4. Rub all vegetables in a little vegetable oil and season lightly with salt. Grill over a high heat on the barbecue. Blacken the capsicums and chillies and "burn" the tomatoes until well charred. Slowly grill the onion and the garlic to cook out the rawness. Once the capsicum and chillis are blackened, put in a bowl and cover for 10 minutes to steam off the skins.

5. Place the onion, tomatoes and squeezed out roasted garlic in the food processor. Rub the skins off the capsicums and chillis and de-seed. Place in the food processor. Pulse together with the olive oil, fresh garlic and salt. Taste for seasoning and spice. This should be a rough, chunky salsa, not a puree.

6. Take the steak and place on the hottest part of the barbecue. Flip every two minutes until at your desired doneness to ensure an even cook.

7. Rest the steak for half the time you cooked it (use a wired rack to ensure it doesn't sit in juices and continues to cook on the plate, which could result in overcooking).

Leaving the sirloin steak in the fridge overnight dries the steak out slightly giving it a better crust, texture and flavour.

Use canola oil not olive oil to cook the steak as it has a higher smoking point so won't leave a bitter taste.

If you prefer a spicier salsa, leave the seeds in one or more of the chillies.

Suggest using sea salt flakes to season as it melts better Into the steak when cooking. 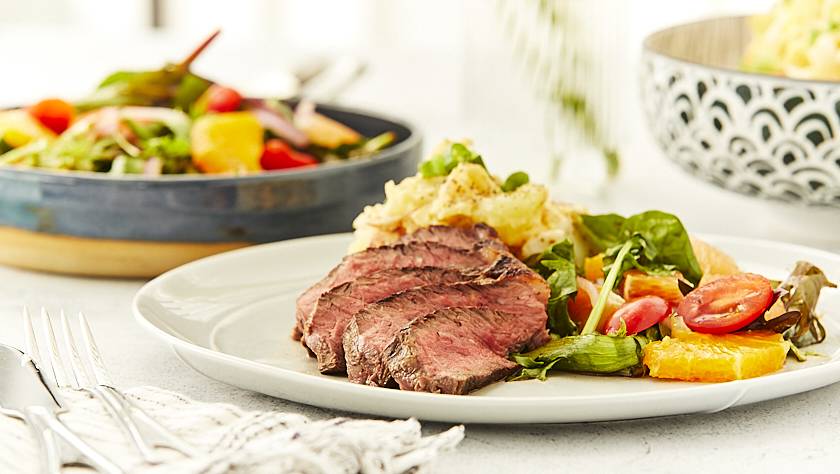 salt and pepper to taste

1. Dice the potatoes into even chunks and boil until soft. Chop up the hard boiled eggs and mix with boiled potatoes, chipotle mayonnaise and cheese. Chop spring onions and use to garnish the potato salad.

2. Peel the orange and grapefruit. Slice the orange, grapefruit and red onion for the salad and set aside.

3. Bring steak to room temperature and season with salt and a light dusting of cajun seasoning.

4. Take the steak and place it on the hottest part of the barbecue, cooking to 55C for medium rare or 60C for medium. Once desired doneness is reached, set aside.

5. Combine all salad ingredients and dress with vinaigrette.

Make sure you oil the steak and not the barbecue to avoid the steak burning.

Use a sprig of thyme dipped in oil to brush the steak before cooking.

Rest steak for half the cooking time. 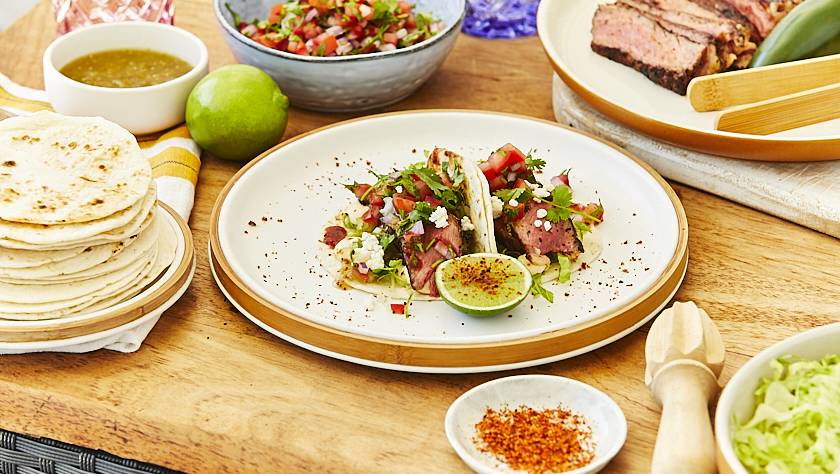 alternatively, you can use 1 cup of store bought sauce

1. Mix olive oil and fajita spice together and apply liberally to scotch fillet. Let steak marinate for 30 minutes and come to room temperature.

2. Make pico de gallo by mixing all ingredients together and seasoning with salt.

3. Light barbecue and bring grill to heat. Close the lid to ensure grills are nice and hot.

4. Make green tomato verde by baking the green tomatoes in the oven for 10 minutes at 250C. Combine in food processor with all other ingredients. (Alternatively use store bought sauce)

5. Cook steak. Toast tortillas for 30 seconds on each side.

6. Assemble tacos by placing some mayo on tortilla, laying some baby gem cos lettuce and sliced scotch fillet on top and adding a spoonful of green tomato verde.

Close the hood on the barfbecue while it heats up to give steak a smoky flavour.

Use an instant thermometer to achieve perfectly cooked steak.

Ask your butcher for a 3cm thick cut for scotch fillet, any thinner it's more likely to overcook.

This story Beef up your backyard barbie first appeared on The Canberra Times.