And queues are expected to continue at the Victoria-NSW border, as Victoria slams shut its border to NSW a minute before midnight.

New Year's Eve was a chaotic disappointment for thousands of Victorians who had ventured north beyond the state border into NSW.

Irrespective of where Victorians had been in NSW, the state government announced mid-afternoon Thursday it would close the border from 11.59pm on New Year's Day.

And anyone returning after midnight tonight will be forced into hotel quarantine.

The impact was immediate. Border crossings were bombarded with a huge volume of traffic, queues stretched for kilometres and drivers reports delays of up to six hours.

There have been reports of police officers resorted to waving cars with Victorian number plates through checkpoints to alleviate the delays.

Checkpoint delays on Friday were down to 15 minutes, he said.

But police have factored in the possibility of more lengthy queues tonight. A police car would go to the end of all border queues at midnight, Mr Nugent. Anyone already in line would be considered as having entered Victoria by the deadline.

The impact on NSW holiday spots has varied. For instance in the NSW Shoalhaven, is largely unaffected while at Batemans Bay, the scenario is altogether different.

Nick Condell, Holiday Haven group manager from the Ahoalhaven, said while some Victorians had left or cancelled, most guests were from Greater Sydney or the Illawarra and were not affected by the sudden border closure.

"We're not as exposed to the border closure as operators further south in Eurobodalla and the Bega Valley," he said.

Further south in the Eurobodalla there were reports of some families which arrived in the morning turning around in the afternoon after the announcement. 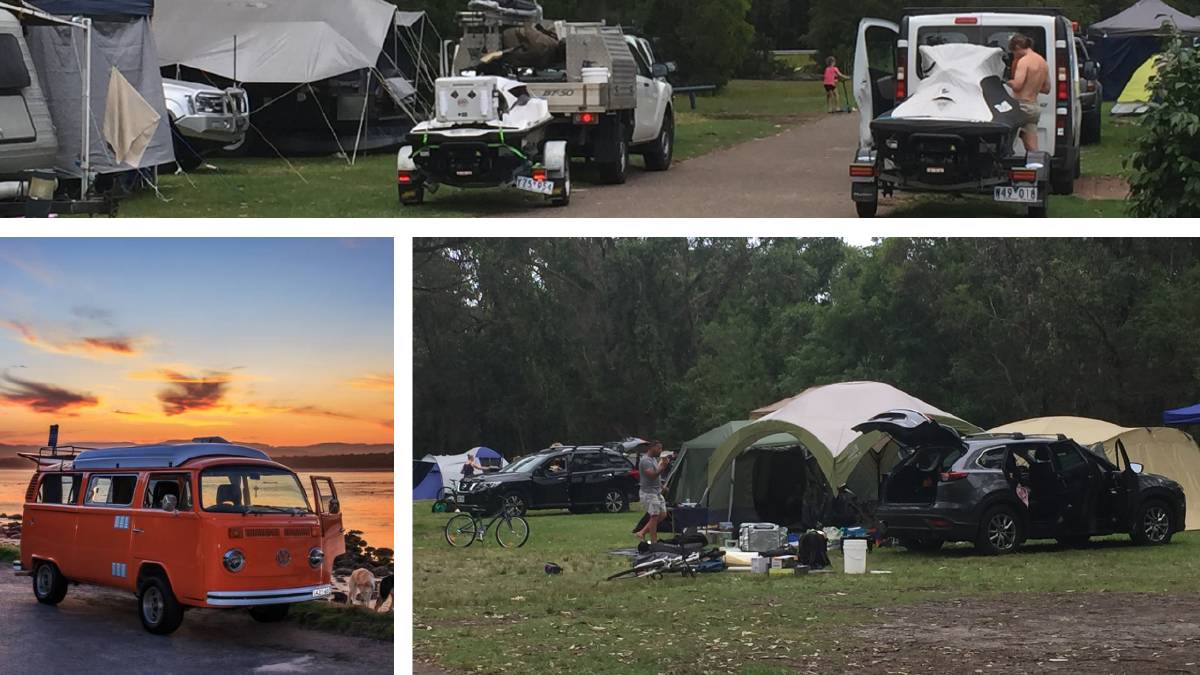 Already the packing up has started.

THURSDAY, December 31, 7.30pm: And almost as quickly as that cross-border holiday started for Victorians, it's over.

And that's prompted a mass exodus of holidaymakers from Victoria in NSW.

On the NSW South Coast, there's movement afoot already as Victorians do their best to avoid another 14-day quarantine period.

There were similar scenes on the NSW mid-north coast late afternoon as campsites thinned out as gear was packed up and cars loaded for the long trip south.

Merimbula Visitor Information centre manager Chris Nicholls said Victorian visitors normally made up about 70 per cent of holiday traffic on the Far South Coast so the border closure announcement was causing bedlam.

"Most people have heard the news and are in the process of cancelling their accommodation or have already decided to leave."

Gayle Hull, from Woonona, is staying at Narooma's Island View Resort with her family said: "It's heartbreaking watching the Victorians packing up on New Year's Eve.

"They've gone through so much already this year. Many are telling us they've had a glimpse of freedom but are devastated its ended so soon."

While many are packing up to head home after the announcement on Thursday, Jodie Hilliers at Merimbula's South Seas Motel said cancellations began on Wednesday.

"We've had more than 25 calls for cancellations starting since Wednesday, people started to get a bit nervous that there was talk of Melbourne going back into lockdowns," Ms Hilliers said.

"And now that the border is closing, cancellations are coming thick and fast."

She said as many as five families had already left by Thursday afternoon and many others were packing up to do so.

Tathra Beachside managing director Carmen Risby said they were flooded with calls on Thursday afternoon and have had to ask people request cancellations in writing via email.

"We were not able to deal with the volume of calls coming in," Ms Risby said.

"We're trying to be empathetic and understanding of everyone, but people are asking what is happening with the border, what is Gladys [Berejiklian] doing, what is Dan Andrews doing - and some of those are the same questions we're asking."

Ms Risby said caravan parks on the Victorian side of the border were overwhelmed with an influx of returning families and were having to turn people away.

"They're full and there is nowhere for people to go, the highway is bumper to bumper - and I don't think the hysteria created by the announcement, I certainly don't think the consequences of that have been taken into consideration," she said.

"Luckily we're fairly close to the border, but what about those further north like in Byron Bay, how are they expected to get home in time?"

Both Mr Nicholls and Ms Risby noted the ironic coincidence of having to help thousands of visitors leave the area exactly one year apart for two separate emergencies.

"It's within days of saying goodbye to everyone last year when we had the fires," Mr Nicholls said.

"We know what happened last year," Ms Risby said. "It took 17 hours to get to Cooma and exactly the same thing is happening exactly one year later, I feel like we should have learned our lesson."

"It's about the mental wellbeing and livelihoods for families at what was supposed to be a happy time."

She said she held fears for the large numbers of Victorians now rushing south and stronger direction on a federal level could have prevented a short-notice direction to pack up and leave.

"It's a major wake-up call for the federal government to step in and make a federal code."

Ms Risby said the one saving grace for accommodation providers on the coast was that unlike last year during the fires, the Far South Coast is still open to holiday makers and is still a beautiful spot to visit for those from around NSW and other states that were allowed to travel.