Content warning: this story contains details of war time experience which may upset some readers.

It was difficult to make the connection; two weeks ago the man in front of me had been told he had just days to live. With his battered and scared lungs giving out and carbon dioxide poisoning his system, doctors told him he would have to go on a ventilator and it was a one-way journey.

Doctors at the South East Regional Hospital, Bega told him to prepare his nearest and dearest for bad news, yet here he was.

Not for the first time has the Grim Reaper blinked first under John Abernethy's gaze.

The country boy from a farm in Western Victoria was changed forever - both mentally and physically - by his experiences as a soldier during the Vietnam War.

When you come home from war you're surrounded by blokes who've seen it all, but suddenly they've gone and there's no one you can talk to, no one to share the nightmares that I had.

The heroism he saw in a night ambush in Phuoc Loi stayed him, driving him for 48 years to get recognition for one of his patrol. He finally achieved it in 2018, after giving extensive evidence at a specially convened hearing.

But it was the death of a Viet Cong soldier that haunted John for years afterwards. During an ambush he killed a soldier only to discover it was a woman, as her bandana fell off, unfurling long black hair.

"I carried the ramifications of that for 30 years. When you come home from war you're surrounded by blokes who've seen it all, but suddenly they've gone and there's no one you can talk to, no one to share the nightmares that I had."

John's voice never waivers but the gravity is obvious: "It just frightened me that it was a woman I had killed. I always thought if I shot a woman it was horrendous."

But he finally found a mental health professional to talk to in 2000, a man who questioned what he was holding back. 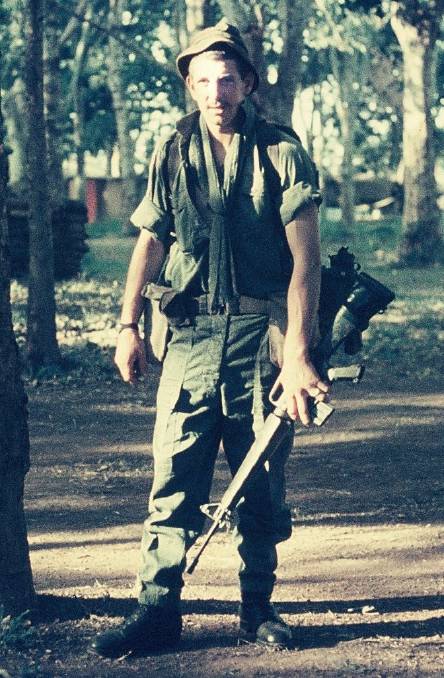 "It was my healing period; I've never dwelt on it since and never had another nightmare but it took 30 years to get it out of my system. I was lucky, I've got mates who committed suicide," he said.

In the pause that ensues there is a much left unspoken, about the horrors of war, the burdens we place on those we send to do "our duty" and how we look after them on their return.

We met in John's modified transportable home in Millingandi, just north of Merimbula on the Far South Coast, ostensibly to talk about his recently released memoir, The Right Break, but first I had to understand how it was possible that we were even having this meeting given that two weeks earlier he had the Last Rites read to him.

It's a story that typifies a lot of John's attitude to life; something to be faced head on, lived to the full and with a tenacity of spirit that again had not let him down.

We followed an enemy patrol into its own tunnel system; we fired up and got a gutful of our own gas.

Much of John's life has been coloured by his experiences in Vietnam. The effects of CS gas poisoning in Vietnam scared his lungs and has been responsible for three pneumothorax (collapsed lung) events - "one nearly killed me" - he told me.

CS gas was used during attempts to flush the Viet Cong from their tunnels in the Vietnam War.

"We followed an enemy patrol into its own tunnel system; we fired up and got a gutful of our own gas," John said.

He was sent back to Australia with a medical note saying his left lung needed to be removed. In fact it never happened but he only ever had partial use of it. It has been a medical issue that has plagued John, not helped by smoking, drinking and at times, a fairly wild lifestyle.

It's one that he hasn't given away entirely, even now, as he talks about enjoying a couple of malt whiskies with his mate Andy Thorp, who has been doing a lot of the driving for John.

In recent months his breathing got so bad he couldn't even manage to walk to the car when being taken for medical appointments. It culminated in an ambulance racing to the South East Regional Hospital, Bega as he battled to breathe, and the urgent call to get his son, Sam by his side.

"After Sam left I knew I had to get out of bed. I've been a fighter all my life. I was retaining carbon dioxide and they were trying to force it out."

Classed as bedridden, he insisted on being allowed to walk to the toilet.

"I planted myself on the throne and locked the door to give myself some time to think."

I turned things around and was home for Christmas day. It wasn't a merry Christmas but it was a bloody sight better than being in there or being dead.

John persuaded the nurses to prop him up in a chair rather than going back to bed as he breathed in a high pressure infusion to rid his body of the carbon dioxide build up.

"I turned things around and was home for Christmas day. It wasn't a merry Christmas but it was a bloody sight better than being in there or being dead.

"Now I have to blow up balloons to get rid of it (the carbon dioxide)."

I hadn't noticed the line snaking across the room to the oxygen tank until John said: "D'you mind if I put my oxygen in?" as he looped the thin transparent line behind each ear and into each nostril.

But here he was sitting upright on his sofa, across the coffee table from me, the tinted glasses hiding the injury that cost him his sight in one eye when a drunk driver crashed into his car in 1971.

His breathing was a little laboured but then it had been two years previous when we met. Somehow though it didn't affect the colour and force with which he spoke. 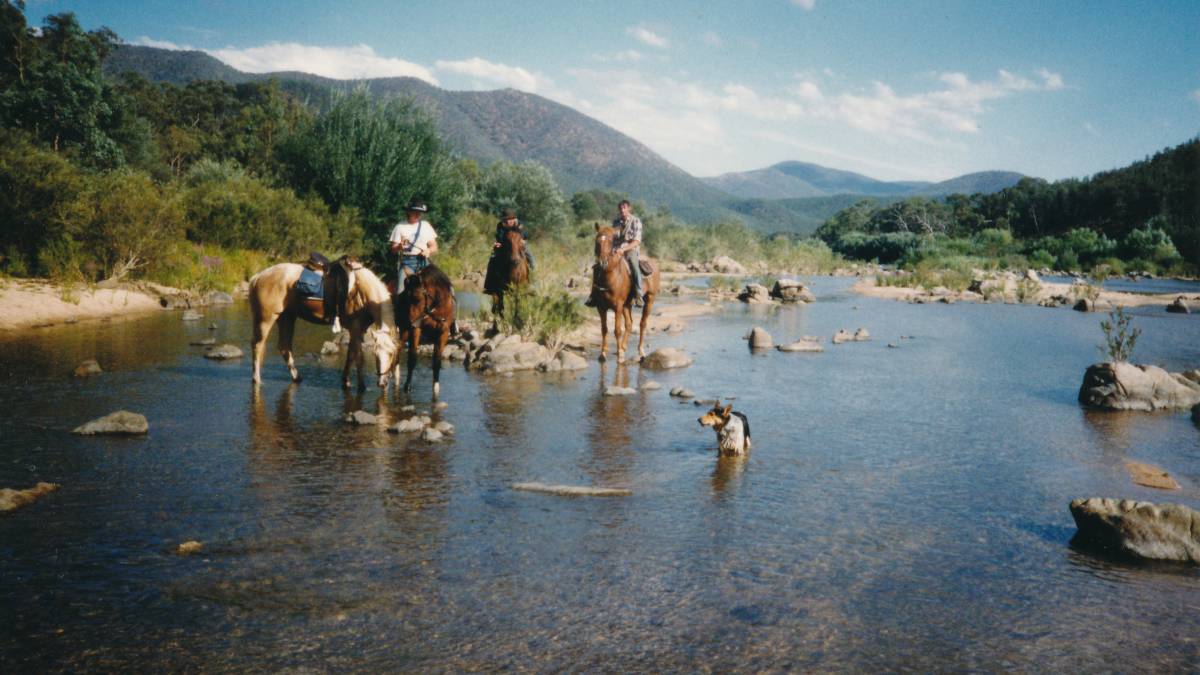 A photo John Abernethy took of his fellow bumby runners in the high country in Victoria during the summer of 1989.

Work on the memoir started last year but only after his son had kept at him as he wanted a record of his father's stories to pass to his own son, Joel.

His editor - John has already written a novel - persuaded him to write a memoir. The information was all there as John has always been an assiduous diary keeper.

However John's memoir is far from being about Vietnam; that is just a single chapter.

His chapters on charter boat operations make for some gripping reading, from enticing film star Lee Marvin to fish with him, to battling 80ft ground swells in a 38ft charter boat in the Bass Strait.

"It was a gamble, I had to rely on experience and gut instincts. I got it wrong, I got it badly wrong that day. Every boat has a design speed, ours was 10-12 knots," he said.

John knew that as the seas got bigger you needed a way of slowing the boat down, he couldn't afford to allow his boat to start surfing the huge and unexpected seas that night.

The experience lead John to invent Seabrake, a device that was unique in allowing variable drag - maximum to prevent a vessel from surfing and minimum for when the vessel is in a trough and needs to hold speed. 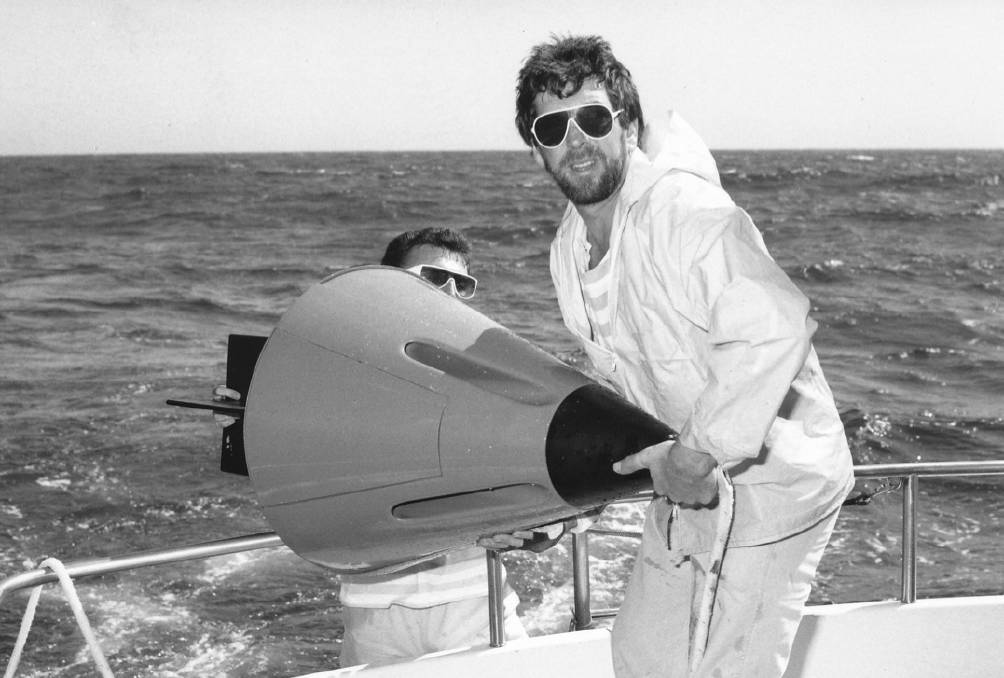 Media Call: Photo taken with John Abernethy for the Mark 1 Seabrake trial off Rottnest Island in 1987.

In 1987 the federal Department of Transport presented John with a certificate "in appreciation of your contribution to SeaSafety and the saving of lives at sea". The framed certificate still hangs on John's wall, it is something of which he is particularly proud. In 1988 Seabrake was given an Australia Design Award.

"You've got to have a way of getting behind the waves and slowing the boat so you're coming down the back of waves.

"It was the only time my first mate looked me in the eye and asked if we were going to get home. I said 'yes' but I didn't think we would."

Seabrake became an entree in to a world of luxury boats, big money and big names but where there's money, there's often trouble.

"I was a very handy seaman but I had no expertise elsewhere and so I had to put my faith in the experts."

These experts were the people who were supposed to take his invention, market it, sign up distributors and ensure the patent was secure.

"But it's all about the dollar. The thing that gob-smacked me from the start was the petty jealousies and the questions: 'How did someone like you come up with this'."

Seabrake is now owned by Martin Burke who bought it in 2008 after John sold everything "lock, stock and barrel" to him. 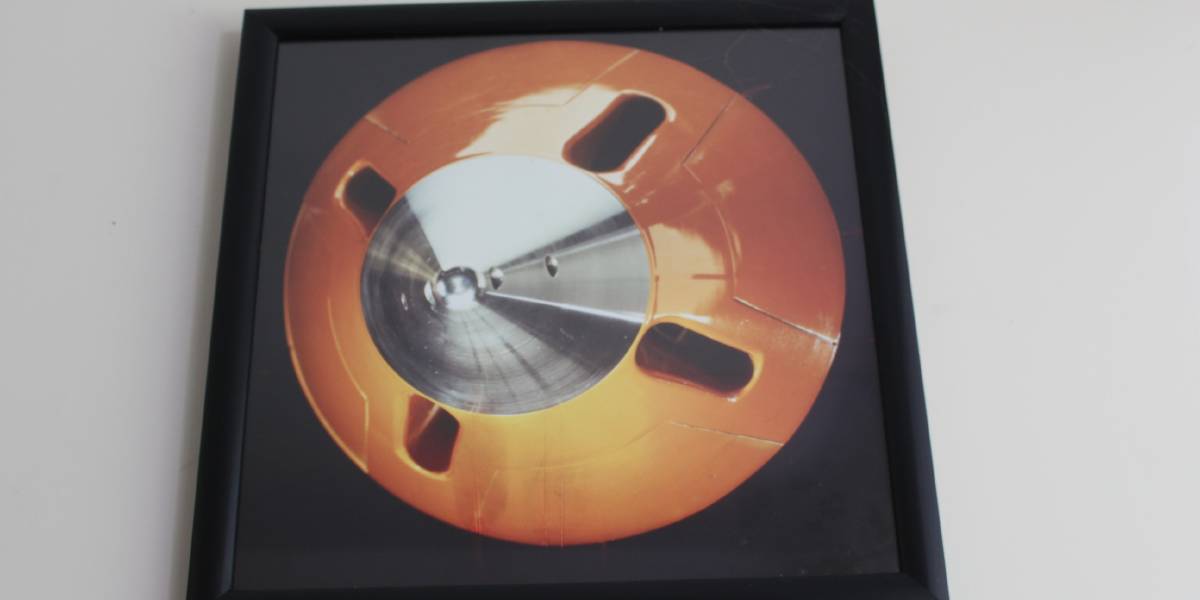 A photo of John Abernethy's invention, Seabrake, on his wall at home.

In the intervening periods, there were highs and lows, discoveries of people trying to cheat him and all set against the backdrop of the "eat, drink and be merry for tomorrow you may die" mentality that Vietnam vets could find hard to shake off.

John's health problems continued and were exacerbated by increasing doses of prescription painkillers. It was these and isolation, that he turned to, after his son Joel died aged 30.

"For a period of time, losing Joel, my son, nothing will come close," is how John describes the pain of his loss.

"There isn't a day I don't think of him, grieve for him."

With Joel's mother Wendy, John set up the Joel Abernethy Advantage Scholarship, part of the Australian Children's Music Foundation, in Joel's memory. The scholarship helps talented musical children who lack the necessary financial support. All proceeds from the sale of John's memoir will go to the scholarship.

Despite, and maybe because of, his many brushes with death, John says there is still life to be lived.

Enthusiastically he talks about the next book.

"I'm going to write another novel this year."

He has it all planned.

Somehow the oxygen line fades into the background obscured by that enthusiasm and lifeforce, tricking you into thinking you're talking to a much younger man.

The Right Break by John Abernethy is published by BGPublishers and can be ordered in hard copy through local book shops or downloaded as an e-book. 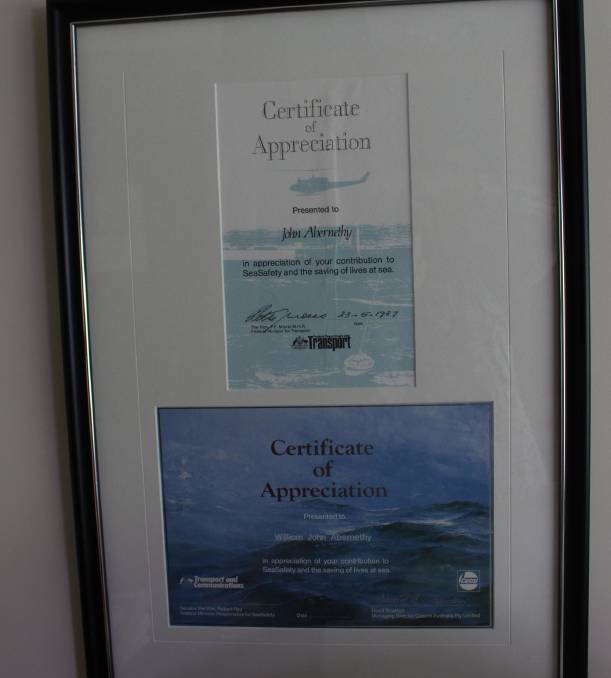 John Abernethy is particularly proud of the Certificate of Appreciation from the federal Department of Transport in 1987 "in appreciation of your contribution to SeaSafety and the saving of lives at sea".

If you, or someone you know, has been affected by the issues raised in this story, support is available at:

Discuss "Journey from the edge, John Abernethy bares his soul"

Discuss "Journey from the edge, John Abernethy bares his soul"