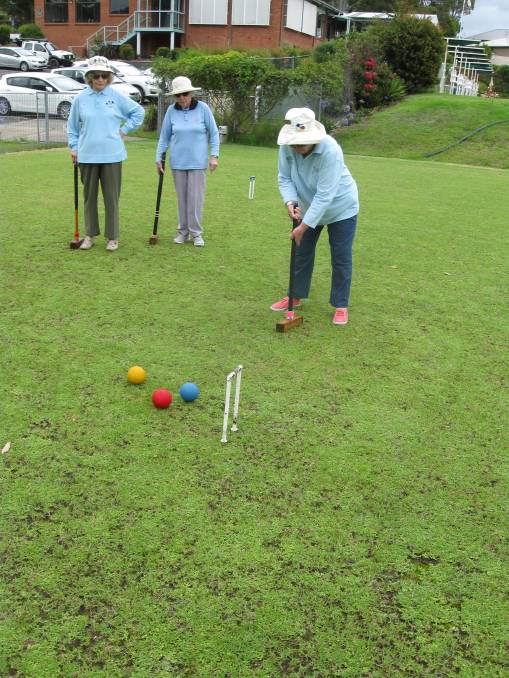 On New Year's Eve five players ventured out in the morning to compete on court 1 of the Dalmeny Club greens for the last competition of golf croquet for 2020. One player, Dianne Sims, drove all the way from Wodonga to take part in the Narooma Club croquet matches and ultimately was the star player of the day with four wins and no losses. Six matches of golf croquet were played with the results being:

The first playing day of the New Year for Narooma Club croquet competition kicked off on Thursday initially sunny morning (with two light showers of rain later in the morning) on court 1 of the Dalmeny Club greens. A good roll up of 10 players competed in five matches of golf croquet competition.

The results were evenly shared with Jean Phillips, Janet Jones and Christine Stent each figuring in two wins each. Highlights of the day were a one-shot hoop scored by Fay O'Connor at hoop 6 in game 5 and a hoop scored by Pearl Hanson with a long shot with the black ball at hoop 4 in game 3. Also of note was that in game 4, Len Favier and Sally McGourty were trailing 1 to 6 against Christine Stent and Jean Phillips after the seventh hoop, whereupon they scored four hoops in a row with some neat play by Sally, only to lose 5 to 7 at the twelfth hoop.

Saturday, January 9: On a warm, sunny day a match of Scarborough singles association croquet was held on court 1 of the Dalmeny Club greens. The three competitors, Len Favier, Janet Jones and Pearl Hanson used nominated balls of blue, red and black respectively, with the yellow ball being wild as per Scarborough croquet rules. In a reasonably tight match Janet Jones, after leading throughout, pegged out on 13 points to win within the time limit, with Len Favier on 8 points and Pearl Hanson on 6 points. Pauline Wilcock and Christine Stent had byes.

Schedule of Competition Matches (on the temporary green at Dalmeny):

The damp ground conditions made high scoring difficult for the field of 179 players where only 11 players equalled or bettered their handicaps on Thursday. In A Grade Ian Miller celebrated his elevation to the top grade with 39 points off his handicap of 12, followed by Robert Sayers who edged out Michael Turner on countback to take second position with38 points.

In B Grade Mark Falconer was favoured by the countback ahead of Robert Hudson in scoring 38 points off his handicap of 17. Third place was taken by Matthew Klose with 37 points ahead of Colin Pratt on countback. In C Grade Graham Clyne from Ryde-Parramatta prevailed with37 points off his handicap of 23, with Norm Watson and Gary Schmidt in the minor positions with 35 and 34 points respectively. The NTP winners were Tony Cobcroft on 3, Mark Anderson on 9,Paul Davey on 14 and Geoff Kirby on 17, while the ball competition went down to 31 points with 14 on the way home.

Yet another good field of 183 players enjoyed warm conditions and good scoring on Saturday. In A Grade Scott Harris produced a memorable round of 41 points off his handicap of plus one in recording a six-under-par score of 66 off the stick, with an eagle on 11, birdies on 5, 8,16 and 18 and 13 pars. John Douros from Queanbeyan finished second on 39 and Chris Ritchie third after a three-under-par round with 38 points.

In B Grade Gary Leahy posted the best score of the day with 42 points off his handicap of 20, one better than Hal Fraser on 41 points. Les Campbell took third place with 39 points on countback from Meg Butler from Royal Canberra and Matthew Klose.

In C Grade Jane Blomfield emerged victorious with 39 points off a handicap of 37, while a three-way countback on 38 points saw the spoils going to Peter Bashford and Ian Harris with Sid Dean missing out. The NTP winners were Hal Fraser on 3 with yet another hole-in-one, Brendan Warby on 9, Michael Turner on 14 and James Benson from Federal on 17, while the ball competition went down to 31 points with 17 on the way home. RGI

It was a great day for bowls on Wednesday with 54 bowlers making up five rinks of triples and three games of fours. The Maggsy Draw was highest winning score and this week the winners were Graham Cummins, Tony Palmer and Col Armstrong (skip) who had a close game where they hit the front, 14 to 12, after 11 ends and then were all square on three occasions in the second half before edged clear for a 22 to 19 win against Wayne Harman, Kevin Callaway and Dennis Maggs (skip).

Second place went to Greg Maloney, Tony Gors and Peter Dillon (skip) who really put the pressure on to win nine out of 10 ends in the middle of the game and continued that top form for a 31 to nine win against Alison Maloney, Margaret Naylor and Vicki Herman (skip).

The resting toucher was won by Warren Bender who managed to get one close at 1.01 to claim the prize. Thank you to Rapley's Quality Meat, Narooma Plaza, for their continued support.

On Saturday there was a good turnout of players with the money decided by Highest Winning Score.

First place went to Jeff McCusker and Peter McKay (skip) who were on top of their game to lead all the way for a 31 to 11 win over Greg Ryan and Neville Mitchell (skip).

Second place went to John Voytas and Garry Carberry (skip) who had a tight game where the score was 13 all after 13 ends and they were down by one shot with one end to play before they picked up four shots on the last end to take their match 27 to 24 against Darrell Goodridge and Gary Murane (skip).

On a very sad note we lost a very dear member with the sudden passing of Jim Grant. It was a pleasure to know Jim and he will be greatly missed. Our thoughts and condolences go out to his wife, Pam and their family.

Sunday bowls resumed for 2021 and we had 24 eager bowlers ready to play Joe's Special triples after an extended Christmas New Year break.

The Maggsy Draw was Highest Winning Margin and first place went to Merrie Downie/Sue Bender, Sue Wales and Bruce Rapkins (skip) who were all square at 14 all after 11 ends before they got into the groove to take their match 27 to 16 against Russell Smith, Peter Hawker and Janet Murphy (skip).

Second place went to the consistent Pieter Vos, Gail Palmer and Terry Lewis (skip) who had a great game against Rob McIntyre, Clare Cork and John Downie (skip) with the scores being all square at 12 all after 10 ends and they were down 17 to 18 with three ends to play before taking charge of the game for a 24 to 18 win.

First round matches played this week were - John Breust played Dennis Maggs in a close match with John leading narrowly until the ninth end where Dennis took over the lead until John wrested it back after 15 ends.

Dennis regained the lead after 17 ends but John came back strongly with a 10 on the second last end to grab the lead again and even though Dennis won the last end John took the match 100 to 98. What a great match to watch.

In the next match Col Armstrong was up against Peter Dillon and this was another close match with scores level at 50 all after 10 ends and again at 90 all after 18 ends. Col took the next end 7 to three and squared the last end for a 100 to 98 win in another enthralling match.

Believe and act as if it were impossible to fail.