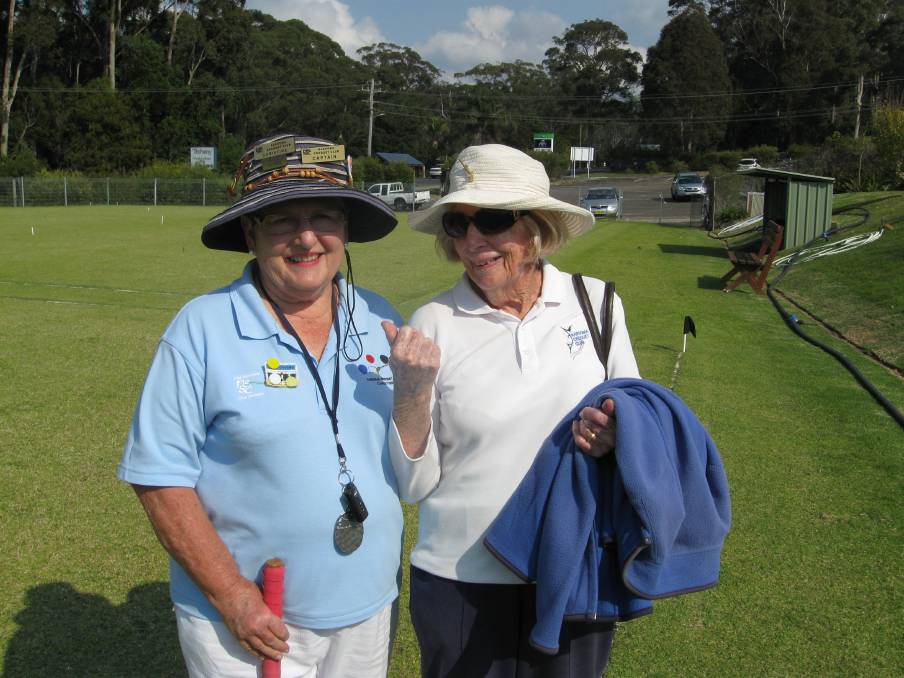 On Thursday morning Christine Stent (handicap 18) met Pearl Hanson (handicap 18), played Match five on croquet court 2. With the respective handicaps being equal this match turned out to be an epic battle. When the time limit was reached both players were on 10 points, so requiring a 'golden hoop' to decide the match. Both players had balls near to the same hoop, going in opposite directions - hoop 9 for the yellow ball for Christine Stent and hoop 4 for the blue ball of Pearl Hanson. Pearl made a roquet shot with her blue ball on the yellow ball but subsequently failed to set up for a hoop with her blue ball, with the yellow ball going through the hoop and winning the match for Christine Stent. The score thus ended at 11 points to Christine and 10 points for Pearl Hanson.

Match No 6 on Saturday morning, on court 1, Pauline Wilcock contested Pearl Hanson, their respective handicaps being 16 and 18. Thus Pearl Hanson was allowed 2 bisques (extra shots). Pearl Hanson strived to maintain a rate of points scoring to that of Pauline Wilcock, but fell short at the end, with Pauline winning by a clear margin of 17 points to 10 points when the time limit was reached.

In the other Saturday match 7, on court 2, Janet Jones (handicap 11) met Len Favier (handicap 20). With the respective handicaps Len Favier was allowed nine bisques (extra shots). Len Favier, using his extra shots mostly to advantage, remained on the heals of Janet Jones throughout the match, but faltered after the eighth hoop. This allowed Janet Jones to break away for a comfortable win, scoring the maximum of 26 points to 16 points by Len Favier and with 33 minutes still left on the game clock.

Thus after seven matches in this tournament the standings are:-

On Monday April 26, a contingent of seven players contested four matches of the regular competition of golf croquet and one match of ricochet croquet (first player / team to run all six hoops with two free shots for each roquet on another ball), all played on court 1. The resultant scores were as follows:-

On Thursday, starting 9am, six doubles matches of the regular round of golf croquet competition were played. In game 5, Sally McGourty played an outstanding shot to score a one-shot hoop with the pink ball at the 12th hoop, albeit to lose the match when her opponent in the doubles game, Len Favier, scrambled the brown ball through the 13th hoop and win 7-6.

The Golf Croquet Handicap Doubles Tournament is on Wednesday starting 8.50am.

A good field of 148 players again enjoyed pleasant autumnal conditions and scoring was moderate. A Grade was taken out by Mark Anderson with 37 points off his handicap of 1, albeit on a countback from Adrian Acheson from Duntry League in Orange. Bill Swan took third place with 36 points after a four-way countback from Allan Maddison, Sam Morgan from Duntry League and Ali Elmasri. In B Grade two players posted the best score of the day, 38 points, but the countback favoured Brian Mills off a handicap of 15 over Mark Falconer. Warick Minett finished third with 37 points on countback from Graham Tasker. C Grade was the third grade to be decided by countback with Alex Gardner prevailing off his handicap of 24 in scoring 37 points ahead of Preston Cope with Grahame Cooke in third place on 36 points. The NTP winners were Adrian Priest from Duntry League on 3, Paul Stokes on 9, Bill Durnan on 14 and Mark Elmasri on 17, while the ball competition went down to all on 33 points.

A field of 126 contested the May Monthly Medal on Saturday while 23 players elected to play in the associated Stableford competition on a course which played long. In A Grade Mark Anderson continued his stellar form of late in going round in two under par in posting 69 net off his handicap of 1. He now plays off scratch after parring the course in his previous two rounds. Phil Haynes came in second with 71 net while Callum Annand finished third with 72 net ahead of Murray Walpole and Geoff Kirby on countback. A three-way countback on 69 net decided the winner in B Grade (and also the May Monthly Medal) in favour of Chris Eardley off his handicap of 15 ahead of Trevor Breust and Bill Baker. In C Grade Gavin Lamb from Coolamon registered the best score of the day with 67 net off his handicap of 32, ahead of Sid Dean and Kyle Dixon on net 72 and 73 respectively. The Stableford was won by Tony Ings with 36 points off his handicap of 19 with Sharon McCarthy from Shoalhaven Heads and Peter Jones in the minor places on 35 and 34 points respectively. The NTP winners were Jackson Taylor on 14 and Rod Streater on 17, while no one stayed on the green on 9 and the winner on 3 was later deemed invalid. The ball competition went down to net 76 and the points equivalent of 32 in Stableford. RGI

Another fine and warm Monday afternoon had 28 bowlers scraped together by the metal collector Doug for the lowest winning margin deciding the winners on 9 in a repeat of last week's result for Pete Can-daughter, packman Ace and Bodalla's Danny Boy from the runners-up on 10 in Chris Silver-Jones, Cobber Peter and Steal Hot-Daughter. The first resting toucher was scored as usual by gospeller Bob but the $222 jackpot did not go off. Wrong bias sinners were IOU Ian and John Red-Lady while the lucky losing rink was 10 lost by Pom Kennedy, Bruce Cover-Outs and Barry Leginter. As has become the custom of late, the raffle runner Towelling Lewis, had his number come out first with the others going to Nod-back Heaven-Less and that Kennedy bloke.

Thursday, although sunny with an almost, at times, non-existent breeze had 24 bowlers under the whip-hand of Tea Cartwright vying for the most "points" to decide the winners both on 20 via countback in High-ain't MacGregor, Pommie Pete and the Macedonian Illya from the runners-up in Garry North, Rabbits Ken and Snoopy Leigh. No resting toucher was recorded nor was the $100 jackpot taken out. Third-week new boy Garry North still had 1 wrong bias together with Dig Simms with the raffle prizes given out by Kath Whiskey-An going to Ian East-Off, Sienna Don and Garry L-Rentacar.

In the semi-final round of the Major Pairs championship saw Shark Finn and Barry Leginter up against Scrap-metaller Doug and the Macedonian Illya, and they led all the way with the closest that Illya and Doug could get was 5/9 after seven ends and showed their superiority with a 23/9 score-line after 12 ends they went on to win 34/10 after 18 ends. The other semi-final between Browny and Sailor Brian and Par Budin and Buzz Saw was a very tight game which had only four ends with a score over 1 and with the two Brian's always behind and the closest they could manage after 16 ends was 11/9 before Norm and Buzz finished on top 15/12 at the 21st end. Next week's final should be an engrossing game so come along and watch and support a great match between four of our top players.

We had a good turnout on Wednesday with 48 bowlers making up seven rinks of triples and one rink of pairs. Winners were decided by Lowest Winning Score and this week the winners were Irene Bodin and Gary Murane (skip) who were all square on six occasions including finishing on a 16 all draw but won on ends against Darrell Goodridge and Jeremy Seaton (skip). Second place went to John Rowley, Tony Fryer and Dennis Maggs (skip) who led 11 to seven after 11 ends and squared the second half to run out 18 to 14 winners against Paul Naylor, Billy Wilton and Shorty Smart (skip). Neville Butt had the first resting toucher at 12.40, well done Neville. Thank you to Rapley's Quality Meat, Narooma Plaza, for their continued support.

On Sunday we had 28 bowlers for four rinks of triples and a rink of pairs. Winners were decided by Lucky Rinks and first place went to Coral Read, Russell Smith and promising skip, Gail Palmer (skip) who struck form early to lead 11 to six after 11 ends and continued their good form to take their match 16 to nine against Rob McIntyre, Steve Shippey and John Downie (skip). Welcome to Steve who is in Narooma for a few months. Second place went to Garry South, Mick Cavic and Darrell Goodridge (skip) who played some top bowls to lead 11 to seven after 11 ends and maintained their margin to take their match 16 to 11 against Leo Winter, Julie Smith and Pam Grant (skip).

Three Major Singles games were played over the weekend. Jeremy Seaton was up against John Downie and Jeremy really started strongly to lead 14 to nil after eight ends. John rallied to trail 10 to 16 after 14 ends and was still in the match after 21 ends where the scores were 24 to 17 to Jeremy. Jeremy then closed the match off taking the remaining four ends for a 31 to 17 win. Matt Dunn played John Scott and in a tight match Matt led 16 to 15 after 15 ends. Matt then put five ends together to lead 26 to 15 and put down some top bowls to take the match 31 to 18. Matt backed up to play John Breust and John bolted out of the blocks to lead 10 to one after seven ends only to have Matt reply strongly to take the lead 15 to 14 after 19 ends. John consolidated to gradually draw clear to take the match 31 to 23.

Our Grade 4 Pennant Team were away to Bodalla on Saturday and were defeated nine points to one, one match to two and 78 shots to 59. Results were - Peter Dillon, John Roche, Greg Ryan and David Herman (skip) lost 16 to 33; Tony Palmer, Dennis Maggs, John Scott and Keith Pickett (skip) lost 17 to 26; and Gary Murane, Les Waldock, John Breust and Garry Carberry (skip) won 26 to 19. Jestyer Weight

A small group gathered for social bowls last Tuesday, when three games of pairs were played. On rink 11 Merrie Downie and Jenny Coulson shared the lead duties in their game and established a good lead in the first half with skip Marg Naylor. Then, the opposing team of Alison Maloney and Cindy Newell (skip) got in the groove to be one shot behind after 16 ends. However, Marg and Co held on for a two shot win, then won the lucky rink prize. Continuing her good luck, Marg Naylor won the meat raffle and Merrie Downie won the 50 Club draw. Thanks to Rapley's Plaza Meats. Belated birthday wishes to Julie Smith for last Wednesday. Entries are now open for the club pairs, so get your teams together ladies. Bitmoregrass