Narooma Croquet Club held three days of competition last week on the greens of Club Dalmeny in cold to mild weather conditions and on slow running greens. There were two days of golf croquet competition on Monday and Thursday, and then on Saturday, two matches of the association singles association croquet regular competition. Over the week Janet Jones, returning after a short spell after injury, played superbly to be unbeaten, being well up to her high standards of croquet play. Paul Chenoveth continued to improve in both golf croquet and association croquet. Paul scored a one-shot hoop in game eight against Len Favier who had only a fair week on the croquet greens. 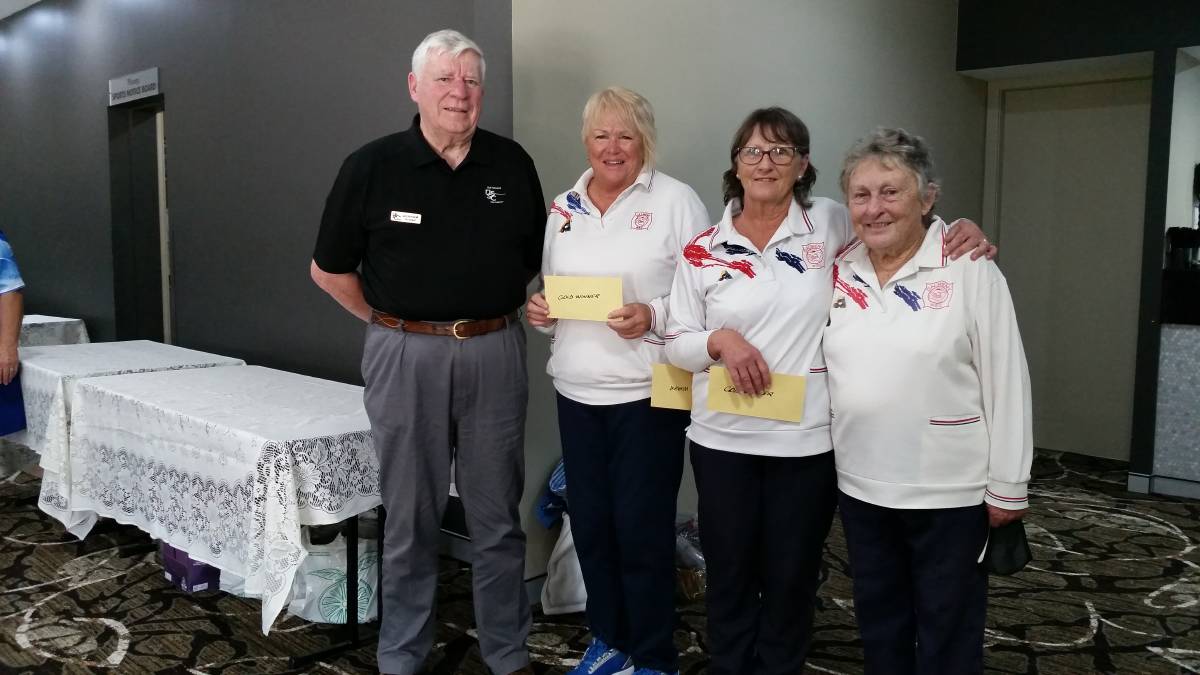 Last Monday morning a small group of four players contested three matches of golf croquet doubles on court 1 at Dalmeny. Dianne Sims was the standout performer when figuring in wins in all three games by good margins. Match details were:-

A good turnout of eight players contested eight matches of golf croquet on the greens of Club Dalmeny. Highlight of Thursday's play was the sparkling form shown by Janet Jones winning all three of her singles matches. Also Paul Chenoveth performed well, dropping only one match by the barest margin of one point to Len Favier, while the rest of the contestants followed in like "brown's cows". Details of the match scores were:

On Saturday morning two singles matches were played of the regular competition of association croquet on the greens at Club Dalmeny.

Match 1 was played on court 1 with Pearl Hanson being opposed to Janet Jones. Pearl was allowed one bisque (free stroke) on every turn that she trailed Janet by four or more points. This kept the match fairly even right until the end. Nevertheless, in a time extended match, Janet Jones went on to win, scoring the maximum of 26 points to 19 points scored by Pearl Hanson.

Match 2 was played on court 2 with Paul Chenoveth being opposed to Len Favier. This proved to be a superlative match with Len Favier setting a cracking pace in front and Paul Chenoveth - in his only second game of association croquet - quickly building points to chase down his opponent. In a match that finished very quickly, Len Favier scrambled in to win by scoring the maximum of 26 points with Paul Chenoveth close on his heels with 22 points.

Players of the Week

So Janet Jones was adjudged to have won the coveted "blue cow award" for her outstanding play in both golf croquet and association croquet, while the promising play by Paul Chenoveth earned him the "pink pig award".

For the week beginning on Monday the program of croquet on the courts at Club Dalmeny will be as follows:-

Regular round of golf croquet competition on Monday at 9.30am and Thursday at 9am.

Association Croquet Singles Championship (round robin format event). The final matches (games 9 and 10) of the championship to be arranged.

Members please be advised that while there is a reemergence of the risk of the COVID-19 infection the process of booking attendance at croquet matches is required as follows:-

On a very cool Monday 25 ladies competed in a medley stroke event. The A grade winner was Tina Wilson (handicap 21) with 74 C/B. The B grade winner was Moira Richards (handicap 36) with 72. Welcome back to Moira who hasn't played competition for a few years. Balls to 78 C/B.

On Wednesday over 70 golfers and non golfers participated in the annual charity event for the Narooma VRA (Volunteer Rescue Association). The event was organised by Narooma lady golfers and was a huge success as over $5000 was raised. Congratulations and thanks to everyone for participating and supporting our raffles.

A field of 125 players enjoyed pleasant golfing conditions on Thursday with the best scores of the day coming in A Grade where Paul Lefel finally won the grade with 41 points off his handicap of 8. Matt Dunn finished second one point behind on 40 points while Bill Swan edged out Stewart Fowler on countback on 39 points to finish third.

B Grade saw a three-way countback on 38 points decide in favour of Colin Pratt off his handicap of 16 ahead of Tony Ings and Tony Cobcroft in the minor positions. In C Grade Graham Mumme prevailed with 38 points off his handicap of 26, one point more than Norm Baxendale, while Jock Munro took third place in a three-way countback on 36 points ahead of Alby Donnelly and Derek Moritz. The NTP winners were Bill Anderson on 3, Rick Porter on 9, Stewart Fowler on 14 and Mal Gregor on 17 while the ball competition went down to Peter Jones on 32 with 22 home.

In the first round of the Club Championships on Saturday 100 players elected to play stroke and 43 to play stableford. In the stroke competition Mal Gregor went round in par to post a net 70 off his handicap of two while a five-way countback was needed to decide the minor positions on 74 net which went to Bill Hannam and Geoff Lanham ahead of Jason Andrew, Rick Porter and Ken Brown. In B Grade Peter Kearney prevailed with net 70 off his handicap of 16 ahead of Steve Richards on 72 while Tim Short edged out Gary Leahy on countback on 73 to take third place.

The best scores of the day came in C Grade, unusually enough, with David Holt registering 65 net off his handicap of 22 to win from Richard Bodell on 68 with Peter Bashford in third place on 73.The Stableford competition was won by Julie Whyte with 38 points off her handicap of 27, with Jenny Wuttke-Hayes and Michael Commins in the minor positions on 37 points. The NTP winners were Henry George on 3, Scott Harris on 9, Diane Williamson on 14 and Brendan Warby on 17. The stroke ball competition went down as far as Mark Rogerson on 77 net on countback and in stableford to Jenny McIntyre with 31 points on countback.

In surprisingly good conditions 64 players contested the second round of the Club Championships on Saturday where Brendan Warby parred the course for the first time in posting 64 net off his handicap of 8 for a clear win in A Grade, well ahead of Bill Hannam who edged out Chris Ritchie on countback on 70 net to take second place. Ben Smith prevailed in B Grade with 72 net off his handicap of 15, two shots better than Peter Kearney and Mitch Mitchell on 74 net. In C Grade Tony O'Dwyer won well with 68 net off his handicap of 21 with Richard Bodell in second place with 72 net and Kyle Dixon in third place with 75 net. The NTP winners were Jason Andrew on 3, Bill Durnan on 9, Adam Harris on 14 and Garry Hunt on 17, while the ball competition went down as far as Scott Ker on 75 net on a countback. After two rounds Mal Gregor leads the scratch in A Grade with 146 ahead of Scott Harris on 149 while in B Grade it is very tight with Steve Richards one ahead of Peter Kearney, 179 to 180. In C Grade Richard Bodell has a clear lead over Tony O'Dwyer with 185 to 190. RGI

Another fine and cool Monday had the first man's son Ken pencilling on the cards for the 32 bowlers with the highest winning margin deciding the winners on a runaway 26 for a returning sailor Marty, Browny and sailor Brian from the runners-up on 10 in Packman Ace and Tom's son Ken. St Eve Muraine scored the first resting toucher and also figured in the $100 jackpot with brother G-Harold, Tin's son Peter, Pete Rum-back 100, Steal Hotdaughter and gospeller Bob. The wrong bias sinners included Bennie or Ken, Steal Hot-daughter (2), Greg Whiskey-An and Nod-back How-Lair. Ace dealt out the raffle tickets for the winners in gospeller Bob, John Blue-lady and Browny.

Thursday saw the Big Dig scrapping the cards together for the 18 bowlers who appreciated that the cool winds died and the clouds separated for a sunny warm finish where the lowest winning margin decided the winners on six after countback for Hi-ain't Mac or Greg, and the 2-Margs, Ponder and Joiner from the runners-up in Bennie or Ken, Cobber Pete and Punter Alan. Brett Off-White Pork scored the first resting toucher while the $218 jackpot didn't go off. Ken Rabbits scored the only two wrong biases while the Ponder lady ran the raffle for the winners in the Macedonian Illya, Chris Snah-back N and as usual Lois collected.

The final of the Triples Championship between Pommie Pete, Steal Coulson and Sailor Brian and Wazza Houston, Par Budin and Buzz Saw, had Sailor Brian's crew getting away to a fine start leading 7/- after 2, 8/1 after 6 and 18/3 after 13 ends before Buzz Saw's boys woke up and got going all too late with second last end four pointer going down 25/14 after 24 ends. The team coming second called it a "flogging" although yours Truly didn't see any score marks other than those on a lopsided card. Maybe the report I heard was a bit biased but Steal was the "man of the match" bowler closely followed by the Pom and Skip Brian in stages. Well done to Brian's crew on a great win and I'm sure Buzz's chip-mates would have rather played on a day when they were better prepared.

Members are reminded that the first of Sailor Brian's Juke Box Bowls is on Sunday so get your names in early for catering purposes for a fun day of open-draw bowls at 10.30am, free barbecue and music.

On Wednesday 36 bowlers made up six rinks of triples. Winners were decided by Lowest Winning Margin and this week the winners were Les Waldock, Bob Murphy and Peter Murton (skip) who were all square on five occasions during their match and were able to put in the important bowls at the right time to win the game 21 to 19 against an incredibly unlucky team of Warren Bender, Barry Goodwin and John Downie (skip).

Second place went to Peter Hawker, Kevin Callaway and Peter McKay (skip) who were down eight to 16 after 13 ends before they got in to game mode to motor home for a 22 to 19 win against Tony Fryer, Allan Chisholm and Peter Jones (skip). Thank you to Rapley's Quality Meat, Narooma Plaza, for their continued support.

The final of the Minor Pairs was played (weather permitting) yesterday, between Peter Tinson and Les Waldock. It should have been a great match and I hope you got down to watch it.

To ponder: When all is lost ask the Tax Office, they'll find something. Jestyer Weight