Dalmeny athlete Nikki Ayers is set to have the biggest rowing races of her life at the Tokyo Paralympics next month.

The 30-year-old will row in the PR3 mixed coxed four competition - a huge achievement in her sporting career since a rugby union injury left her with no movement of her foot five years ago. 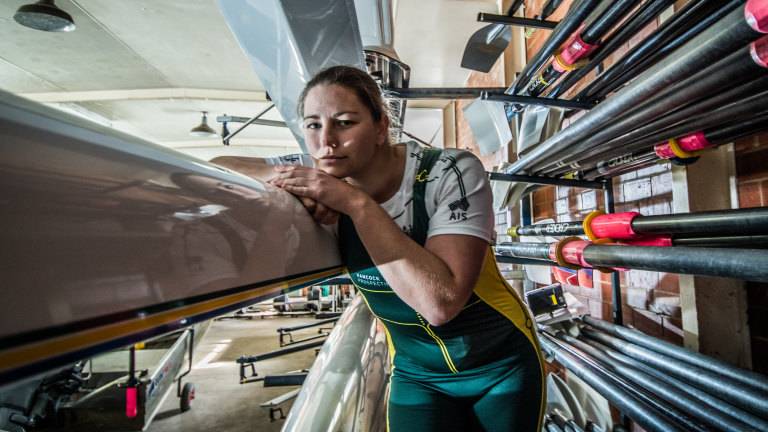 She left her family at Dalmeny and moved to Canberra to pursue her sporting dreams after school.

In 2016, she had been playing rugby union for 10 years and her goal was to make the Wallaroos team.

It was a pre-season match when she dislocated her knee, permanently damaging nerves and an artery, leaving her with no movement of her foot.

"We were winning and in prime form," she said.

"I made a break down the sideline, offloaded the ball and got tackled. I looked down and my knee was facing one way and my foot was facing the other.

"I was on the ground rolling around screaming."

A team mate jumped on Ayers to stop her from rolling around. Her older sister Megan was also playing and rushed to her aid. 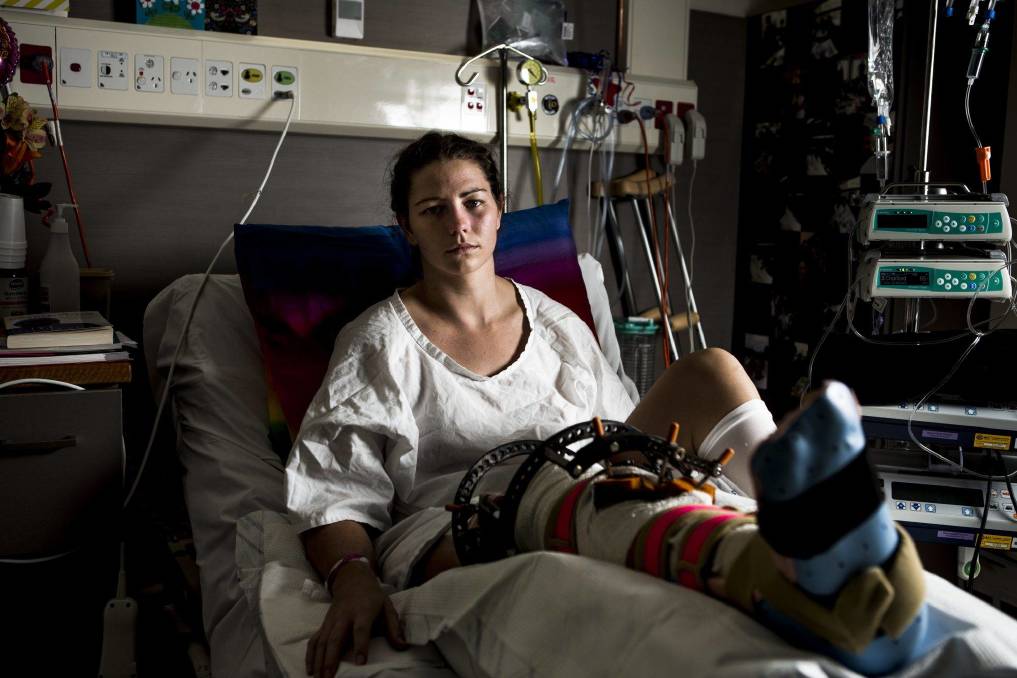 Nikki Ayers at the beginning of her recovery journey, learning to walk again after a rugby tackle went wrong in 2016. Photo: Jamila Toderas

READ MORE: How to watch Tokyo Olympics in Australia

"During the dislocation, I severed my popliteal artery and peroneal nerve," she said.

"Because I wasn't getting blood supply, I adopted compartment syndrome and had to have my whole anterior compartment removed."

Over 21 days in ICU, she had 10 surgeries to remove the dead muscle and undergo a knee reconstruction to repair three ligaments. The damaged caused foot drop.

She had a total of 16 surgeries in nine months and thought her sporting career was over.

"I knew my rugby union was over and thought my sporting career would be too, but I had no idea what was out there," she said. 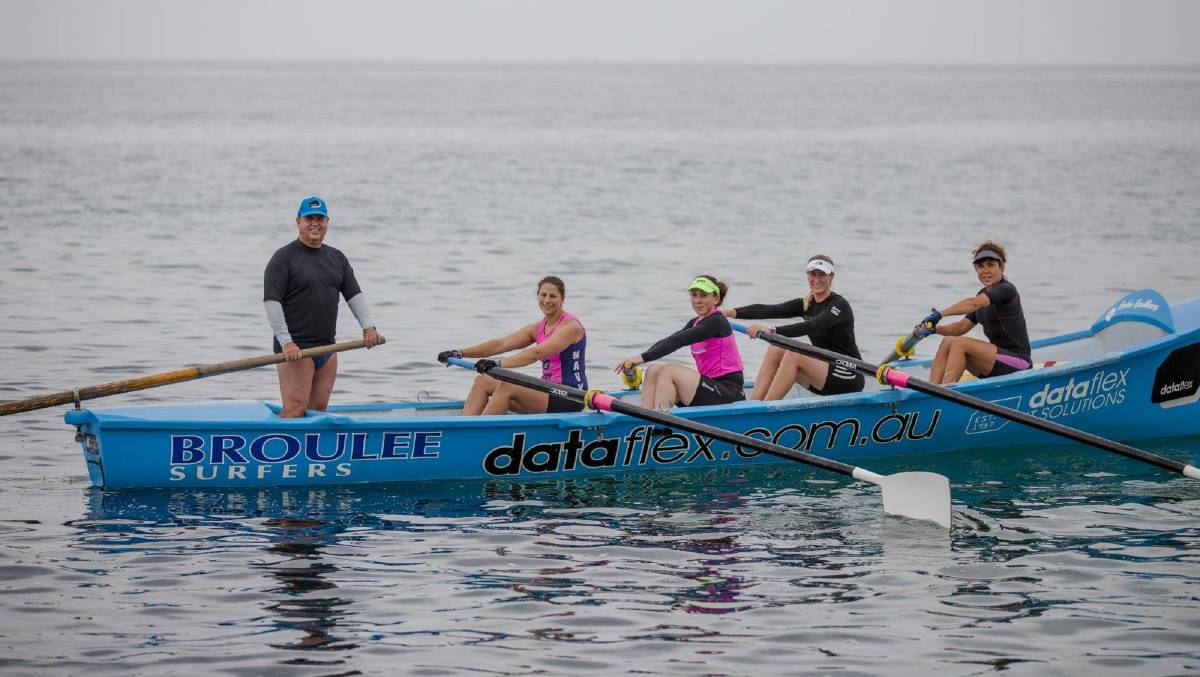 Mates had introduced Ayers to surf boat rowing before the injury and encouraged her to get back in the boat.

"The biggest challenge was overcoming my injury and being able to believe in my potential," she said.

"To prove to myself that my injury has provided more opportunities. Finding what I can do, rather than what I can't do - it's limitless.

"What helped me realise that, was my sister and my family who all supported me."

She soon entered the world of sculling and sweep rowing out of Capital Lakes Rowing Club.

Ayers managed to adapt to the sport with drop foot as her feet were kept in shoes.

"I have been building up strength in my bad leg to compensate the lack of power and have changed my rowing style to adapt," she said.

Since 2018, Ayers has been training competitively, balancing it with work.

She is an intensive care registered nurse and juggles her intense training, coached by David Fraumano and David Bagnall. In the lead up to the Paralympic games, Ayers dropped hours at work to increase training.

"I decreased my work hours to two days a week, which has helped me get in my prime and focus on my goal," she said.

"I do three training sessions every day of the week with Sundays off. I am feeling as strong and as fit as I have ever been.

Ayers is up at 4.30am to train on the water. She is out rowing by 6am and then heads to the the ACT Academy of Sport gym.

She then works evening shifts at the hospital, finishing at 9.30pm.

Ayers loves the challenge of rowing.

"I love that it's physically and mentally challenging," she said.

"Its' a sport where you will never reach perfection, but you want to be the best you can be."

Preparation and expectations for Tokyo

Ayers said the feeling was "surreal" and because of COVID-19, training was compromised.

She said two male rowers in her crew lived in Sydney and the other female rower was in Melbourne, making it tough to cross borders and train together.

"We have only trained together for a week since being selected in March," she said. 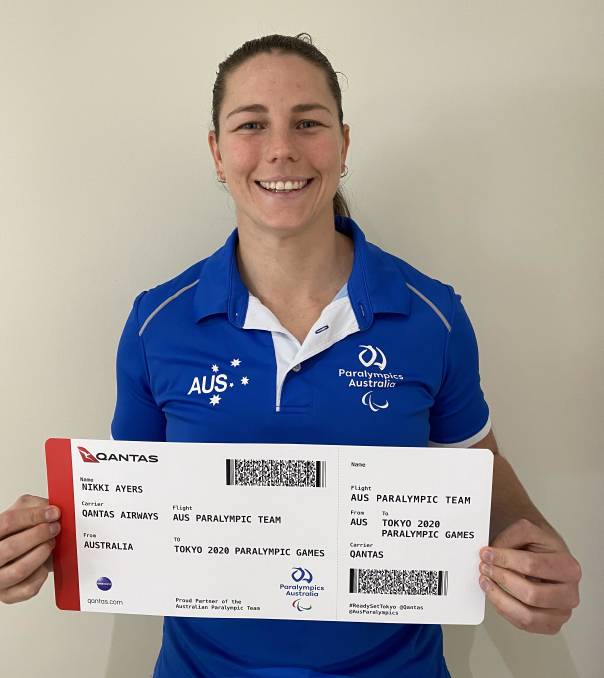 Nikki Ayers with her Paralympics Australia boarding pass for Tokyo.

"We haven't been able to prepare as much as we liked in the boat, but I am excited to get racing together," she said

"I think we have a really good crew and lots of potential.

"We are doing the best we can to adapt to the circumstances."

Ayers said the plan was to arrive in Japan early August and quarantine before flying to Tokyo on August 20.

"Once we get to the village, we stay in our bubble and only go out to compete," she said.

To minimise COVID-19 risks, Ayers said Paralympics Australia has set certain rules, such as not allowing Aussie athletes to eat in the dining hall.

She wasn't sure how much of Japan she could go out and see.

"It's a shame we can't go out and experience the Japanese culture and give to their community as much as we would like to," she said.

It's Ayers first time in Japan and heard the water will be rough.

"It is going to be hot, humid and rough water," she said.

"I have also heard reports of flying fish jumping in the boats as well."

Ayers has been training in a heat chamber twice a week to prepare.

"You get used to it and become sweatier and sweatier each session."

Get to know Nikki Ayers

Favourite thing to do when home: Hanging with family. It's nice to have a break from the intense life of an elite athlete. 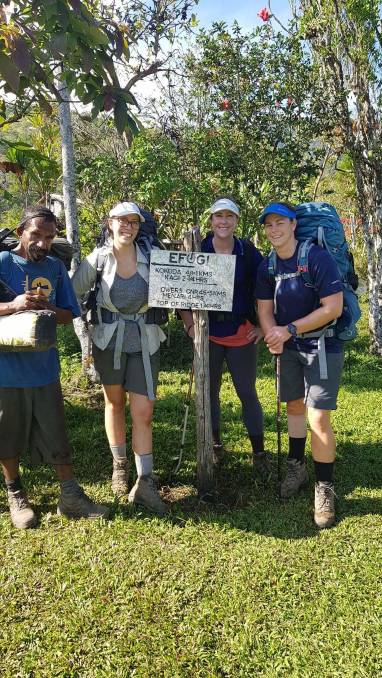 Nikki Ayer's friend Pip Butt asked if she wanted to walk the Kokoda Trail after her injury. Nikki pushed herself to give it a go.

Your childhood dream: An Olympic chook feeder. When I was a kid, I wanted to go to the Olympics and I liked feeding chickens so I made up my own own event.

Sporting career highlight: Represented Australia in the 2018 World Championships in Bulgaria. It was the pinnacle moment of my achievements, to have been recognised since injuring my knee.

Who you will be watching/cheering for at Tokyo: Everything and everyone! It feels different knowing people who are competing, other athletes from the ACTAS gym. I will be watching and supporting them all do well.

Your inspiration: When I injured my knee, I read Kurt Fearnley's book which was motivational. It was about realising that if you have been dealt a bad card, you can do something to make the most of it. Also, being a part of the elite athlete world where so many have overcome adversity and challenges to adapt and be independent. There are people all around me who are very inspiring.

READ MORE: All the latest news from the Tokyo Olympics

Discuss "Stopped in her stride, Paralympian Ayers hits the water to overcome adversity"

Discuss "Stopped in her stride, Paralympian Ayers hits the water to overcome adversity"