She suffered burns to her head and hands, but was most upset over her beloved dog Stinky who did not make it out alive.

On Sunday, August 15, Beryl was pottering around her Garland Town home at Moruya's North Heads, before she noticed something odd. 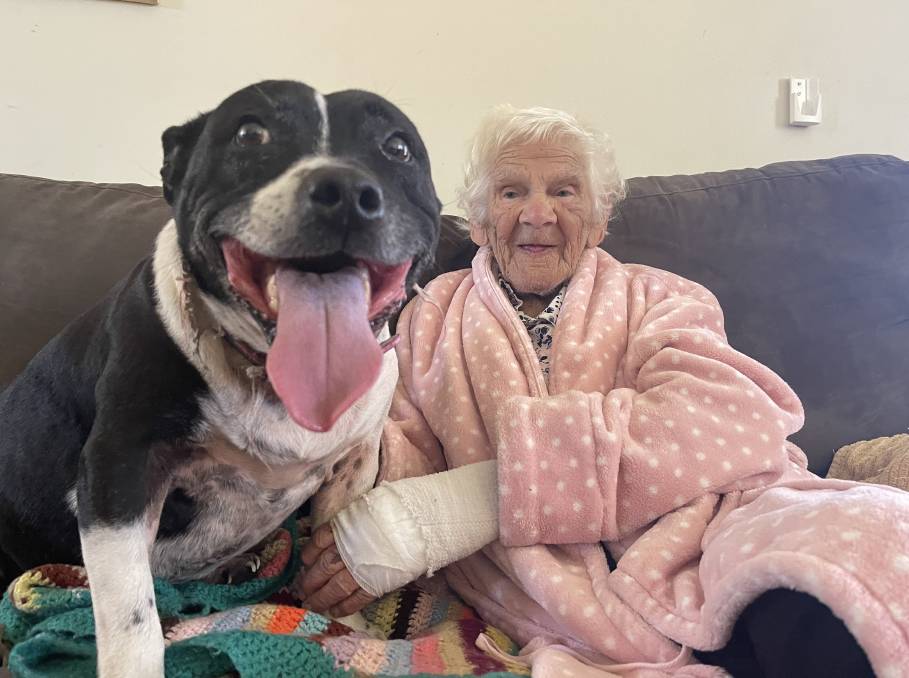 Little One the Staffy stayed by Beryl Brierley's side the day the fire took her home and the life of wolfhound, Stinky. Picture: Claudia Ferguson.

She walked inside and heard loud crackling. Smoke began to seep from the walls and fill the room.

"I looked around and she (staffy named Little One) was following me, then the big dog (Stinky) was there but he ran into the bedroom from the loud crackles and big boom."

Beryl felt herself drop to the ground.

"When I was standing, I couldn't breathe," she said.

"I went down on the floor and crawled out of the lounge and outside."

The house became inundated by fire. Her staffy didn't leave her side as she managed to crawl her way out.

Her neighbour Jake Murray heard an explosion from his home down on the flat.

"I was in my lounge room and heard a bang; I didn't think much of it," he said.

"Then I heard another bang where I jumped up - I knew something wasn't right."

He looked out the window and saw a huge mushroom cloud of smoke. Pictured from across the Moruya River, Beryl Brierley's home goes up in flames. Image: Supplied.

"I knew Beryl's house was gone; it was pretty crazy," Mr Murray said.

He told his partner to call Triple-Zero (000) as he ran outside to his car.

He reversed over to his neighbour, Mick Brown, and asked for help.

"I didn't know what I was going in to and was thankful he jumped in," Mr Murray said.

They drove up the hill and saw Beryl outside on her hands and knees.

"She had bad burns on the back of her head and hands," Mr Murray said.

"Seeing the house was like something in a movie. Everything had gone up in flames.

"When I got up there it was down to the ground - it happened so fast."

He picked Beryl up off the ground and carried her to the front seat of his car.

As he drove to the hospital, Beryl mourned over Stinky.

"It was really hard hearing a 90-year-old woman burst into tears," he said.

"She was really upset and sad about her poor dog stinky who sadly died in the fire."

With one hand on her knee, Mr Murray did everything he could to comfort Beryl, reassuring her everything was alright.

"I am happy I was in the right place at the right time and could get her back to her family - that was very important to me," Mr Murray said.

Staff at Moruya District Hospital were quick to help Beryl as soon as she came in.

"I thank them so much," Mr Murray said.

Almost one week after the fire, a nurse popped in to check on Beryl and re-dress her wounds.

She was staying in town, at her son Allan's home.

But, she doesn't belong in town.

Her home on the hill is where her heart was most full.

She wanted to be back where time stood still.

"I liked sitting in the sun; that old place had no rush," she said.

"You can sit out in the sun and meditate and nothing bothers you. You could do whatever you want in peace."

She planned to live on that hill to the end of her time.

It was only a small home, but held a lot of memories, for a lot of people.

The house was always open to her family who would come and go.

Back in the day, she had family who lived on the flat too.

To locals, it's known as Brierley's Hill.

When her kids were young, they would visit with surprises.

"They would bring around little animals," she said.

"They used to come up with all sorts. There was a baby possum, foxes, pigs, magpies and kangaroos and whatever you can think of.

"Even one day my son Allan came up from the river with a baby seal.

"I said 'you take that little fella back to the river'," she chuckled. 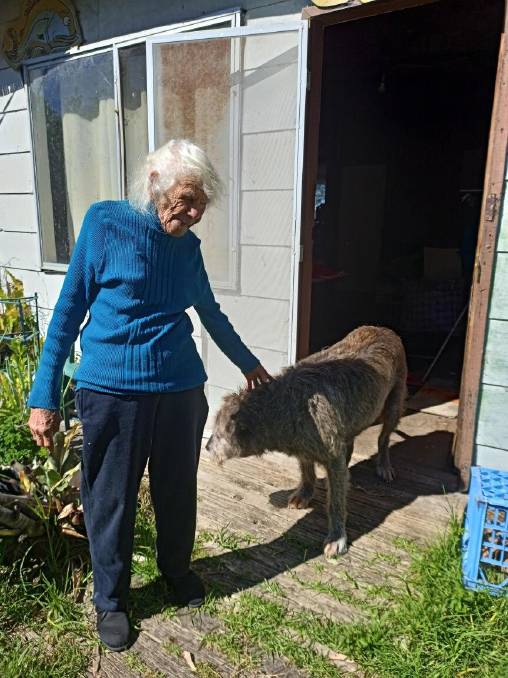 Beryl loves animals just as much as humans, if not more. She would care for anyone and any thing.

The thought of Stinky the wolfhound makes her heart ache.

Stinky was buried after the blaze and Beryl said her goodbyes.

Stinky was her son Gregory's dog, who passed away in February this year.

It felt like "everything had fallen to pieces" as she had also lost her only daughter, followed by her husband Ernie a few years later.

Now her home was gone too.

Beryl thought back on the day of the fire, and felt most lucky to be alive.

"I was lucky to get out of there," she said.

"I was so pleased with the young fella down the hill. He came up as I was crawling and didn't know where I was.

"It was really nice of him to race up there."

After the fire, Beryl was left with only the clothes she was wearing and no shoes; she chuckled over the thought of having odd socks on.

Thinking back on what was lost in the fire, she was most upset about Stinky, her photos, and the cross she kept from her son's coffin.

She was yet to visit the burned ruins, hoping the cross was still intact.

READ MORE: 'A taste of spring'; Cold and windy weather to return to the South Coast

The day after the fire, family member Ross Moore created a GoFundMe page.The community quickly responded and $14,000 was raised within a week.

He idolised his Aunty Beryl, saying she was a happy woman who appreciates and cares for all walks of life.

The family quickly banded together to help Beryl get back on her feet. They organised a cleanup of the burned ruins and to clear the asbestos. Family members have taken turns to spend nights with Beryl as she was still shaken.

Beryl wants to move back on the hill.

Her family hope to find her a kit home or something to replace what was lost.

"I told them I would sit under a piece of tin," Beryl said.

"Just to keep the rain off me."

Beryl doesn't fuss much. She is a tough woman whose upbringing on the Wallaga Lake mission taught her resilience.

She moved to Moruya aged 16, where she met her late husband Ernie Brierley. The family worked in the fishing industry all their lives.

They lived by kerosene lamps and candles until the 70s, when they finally had electricity hooked up.

It was understood electricity could be at fault and sparked the fire that day. However, Police were still investigating.

Moruya Fire and Rescue called on the Rural Fire Service for support to extinguish the blaze. Picture: Supplied.

READ MORE: Mayor sparks a conversation on ways to help businesses during lockdown

Looking back, Beryl came to realise she may have had some warning.

In the days leading up to the fire, she felt a strong presence of her deceased loved ones.

"Two days from the fire I had the feeling ... I kept looking at the door waiting for him (late husband Ernie) to come in," she said.

She constantly heard her mother's voice, perhaps a spiritual sign she couldn't decipher.

"Then all of a sudden it all happened," Beryl said.

She was grateful of her family and the community's response after the fire.

A lovely local woman paid for her groceries at the checkout and Vinnies opened their doors exclusively for Beryl to grab some shoes and a change of clothes.

This story 'I was so lucky': Indigenous elder crawls to safety as fire destroys home first appeared on Bay Post-Moruya Examiner.

Discuss "'I was so lucky': Indigenous elder crawls to safety as fire destroys home"

Discuss "'I was so lucky': Indigenous elder crawls to safety as fire destroys home"