"Surely not?" she said, a little startled.

"I'm pretty sure that was a bloody rat," I said, grabbing the remote and pressing rewind.

Whatever it was that had flashed across our screen for that nano-second left us feeling like those audience members in Fight Club subjected to Tyler Durden's habit of splicing frames of subliminal pornography into family films at the cinema.

Then again, we were watching the latest episode of And Just Like That ... so such reactions have become commonplace. 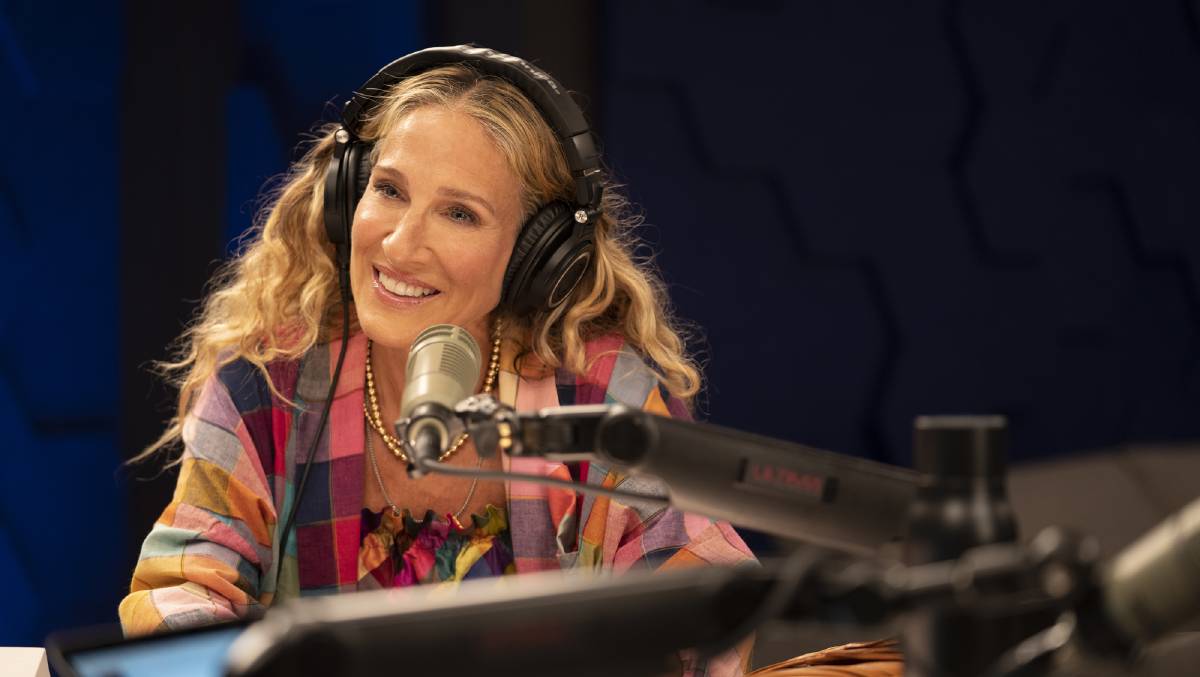 And Just Like That ... is akin to a weird form of torture. Picture: Foxtel

My wife and I have been approaching HBO's Sex and the City spin-off the same way some couples embark on joint exercise or co-dieting. Watching this show is such a daunting, unpleasant experience, we've needed each other's support and motivation to see the challenge through.

The difference between an hour of Kath and Kel tandem power-walking and an hour of Michael Patrick King's fresh abomination, however, is there is some kind of pay-off when the torture of exercise has ended; endorphins, muscle tone, fitness. There are no such benefits to watching And Just Like That ... It is simply torture; weird, creepy torture, the kind administered in a sex dungeon overseen by a coven of whining witches hell-bent on doing something unseemly with your self-esteem in the vain hope such sadism will make them young again.

Anyhow, back to the rat (and to be clear, we're taking rodents here, not nasal swabs).

The furry interloper appears exactly six minutes into the sixth episode of And Just Like That ... now streaming on Foxtel and Binge.

Miranda (Cynthia Nixon) is walking through a park with her university lecturer, Dr Nya Wallace (Karen Pittman), when, somewhat inexplicably, the camera pans down to a garden bed. That's when the very rat-like creature strikes, or, rather, jumps from lower screen left, to lower screen right. It doesn't just skulk about, it performs a full-blooded vault, after which the vermin presumably flees to a New York sewer where it collects 50 bucks from its drunk rat mates who dared him to streak through the shot.

The episode, Diwali, is directed by Nixon, the actor who in the 17 or so years between when Sex and the City ended and its ill-advised sequel began, turned to political activism. 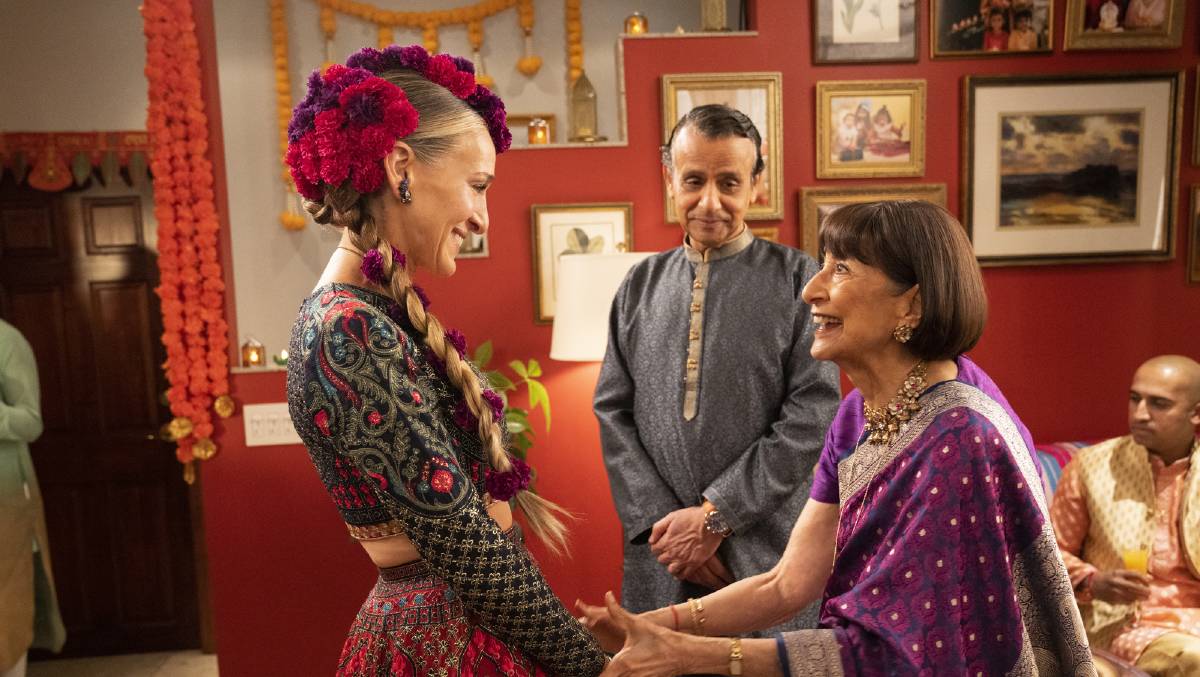 The show has gone all-out to address issues of race and gender fluidity. Picture: Foxtel

The fact Nixon has such a full dance card could explain why she missed the rat. Then again, the whole rat cameo might well have been deliberate and just yet another bad call among so many others in relation to this awful series.

Ignoring the predictable caveats from some quarters that AJLT has been good enough simply because of the clothes (that just doesn't cut it anymore), critics have justifiably rounded on the show.

The sassiness and social awareness of Sex and the City has been replaced by one, long apologetic dirge, where the apparent sins of the previous episodic incarnation (and its terrible movies) have sought to be atoned through an overcompensation of inclusivity.

As if adhering to some kind of social media-age box-ticking exercise, AJLT has gone all-out to address issues of race and gender fluidity, which is great, but its ham-fisted attempts to integrate such realities through the problematic prism of ageing, wealthy, white entitlement has only generated the kind of inauthenticity which spells rat poison for any reboot.

On top of all this, there are no laughs. None.

So unfortunate, on and off-screen, is AJLT, it's beginning to give off a vibe akin to those purportedly "cursed" productions of the '70s and '80s; like The Exorcist or that movie starring Drew Barrymore when she was a kid (not E.T., the other one).

First up, when AJLT was being made it was revealed Kim Cattrall, who played Samantha Jones in Sex and the City, would not be reprising her role as the brash publicist with a healthy libido (is there any other kind?).

Whether Cattrall was incredibly shrewd, incredibly lucky (her vanishing apparently the result of a spat with Sarah Jessica Parker, who stars as Carrie Bradshaw) or in possession of a functioning crystal ball, her non-involvement has served her well.

Secondly, and sadly, a cast member (along with anything resembling a compelling storyline) died midway through the filming of AJLT.

Willie Garson, who played Carrie's friend Stanford Blatch, succumbed to pancreatic cancer after three episodes. Stanford's absence from the show was papered over with the explanation he'd up and left the country and his apparently unperturbed husband to mentor a TikTok star in Tokyo. 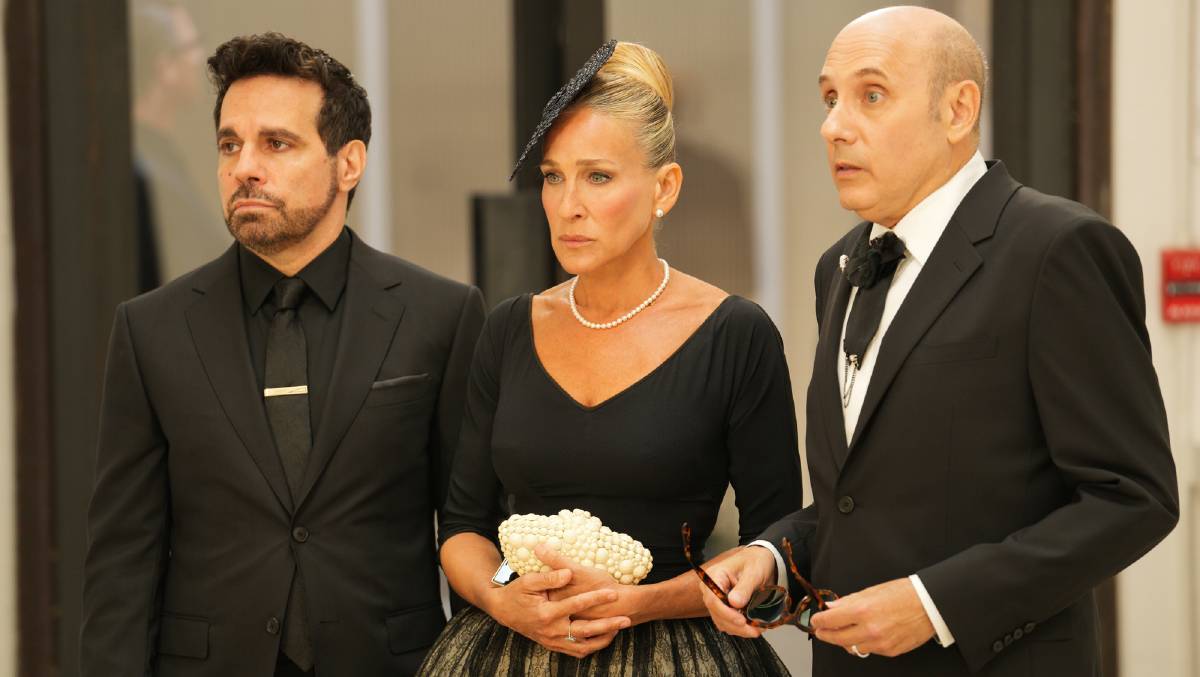 This devastating news was delivered via a hastily penned and patently inadequate letter.

Way back in 2003, Sex and the City fans shared Carrie's distress and befuddlement after her writer boyfriend, Jack Berger, broke up with her via a Post-it note.

Those same fans must have felt equally abused by the glib erasure of Stanford in an act so clearly antithetical to his character arc.

Thirdly, Mr Big; the elephant in the room.

Since AJLT premiered a few weeks ago, Chris Noth, who plays Carrie's late husband (killed off in episode one) has faced allegations he sexually assaulted a number of women in the years after he came to fame. So corrosive has the controversy become, Mr Big's scenes have reportedly been removed from the series finale, in which he was to appear with Carrie in a fantasy sequence in Paris, where she'd chosen to scatter his ashes.

Understandable and probably appropriate, but where was this decisiveness in the editing room when an inapposite rat jumped out of the bushes?

The rat, for me, has come to represent so much that is diabolical about AJLT.

Whether via bad management or bad luck, or a combination of both, the show has become infected with the pernicious fleas of a former era trying to regain relevancy in a new (and lucrative) milieu.

I felt similarly bilious when watching last year's Friends reunion. Witnessing the ageing actors (in various stages of renovation) be fawned over by sycophantic host James Corden was hurtful on a personal level. It felt as if my entire generation was being held up as some kind of freak show. I wanted the ghost of Kurt Cobain to appear and, like little Drew Barrymore, set it all on fire.

The kids from the Harry Potter film franchise went through a similar televised reunion process earlier this month but because they were still being breastfed when cast in the movies two decades ago, their appearance lacked the same existential gut punch for audiences grappling with their own mortality.

Still, it's nice to see some of them have reached puberty.

Thankfully, the Friends special was a one-off assault. It ended quickly and we could sort of pretend what we'd just seen never really happened (although it did).

The makers of And Just Like That ... have displayed no such abstention.

Week after week, they've cashed in by dragging these message-less and cadaverous cast members around the greatest city in the world, as if we're watching Weekend at Bernie's in the Big Apple rather than the reimagining of a clever show which laughed at itself while giving its international audience much-needed injections of elan as they went out and braved whatever slings and arrows their own environments threw their way.

Mind you, as we grow older, cynicism tends to become a default setting and, sometimes, we smell a rat where there isn't one.

This time, though, the rat's real.

This story And Just Like That ... fails the rat test first appeared on The Canberra Times.