A TOTAL fire ban today heralded the start of the bushfire season with the Rural Fire Service warning of a potential horror fire season. 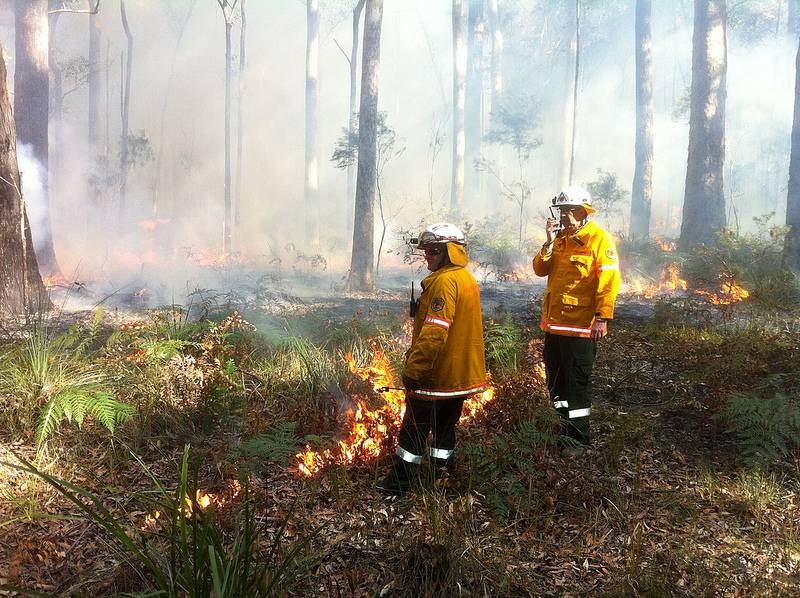 Eurobodalla residents are being urged to be much better prepared than last season with the bushfire season rules and fire permitting coming into play last week.

The National Parks and Wildlife Service meanwhile continued with a hazard reduction burn in the Biamanga National Park between Cobargo and Bermagui that was started over the weekend.

A total fire ban was declared yesterday across parts of NSW including the Far South Coast for today, due to forecast warm and windy conditions.

NSW RFS Commissioner Shane Fitzsimmons said the Total Fire Ban has been declared due to the onset of higher temperatures and gusty winds.

“The wind is going to be the main concern across a large part of the state, with gusts of around 100 kilometres an hour forecast,” Commissioner Fitzsimmons said.

“Under these conditions, any fires which do start have the potential to spread quickly and prove quite challenging for firefighters.

“For this reason, we’re asking everyone to take precautions, be aware of their surroundings and report any fires to Triple Zero.”

Commissioner Fitzsimmons said that the early onset of warm and windy weather is a reminder about the need to be prepared heading into the fire season.

“The seasonal outlook produced by the Bushfire CRC suggests above average fire conditions across much of NSW, particularly with extensive grass growth.

“Community complacency is a real concern so it’s important that everyone prepares themselves, their family and their home.”

On a day of Total Fire Ban, there is a ban on any fires out in the open. Full details on Total Fire Ban rules is available on the NSW RFS website at www.rfs.nsw.gov.au

The local RFS command is not mincing its words either when it comes to its predictions.

“This season we are expecting hotter days and warmer nights, and there is a lot of dry vegetation about,” Rural Fire Service Far South Coast team manager Superintendent John Cullen said.

“We had great autumn rain and early winter rain, which really improved conditions for growth. We are currently seeing the highest fuel loads experienced for decades in grasslands and in the bush.”

Supt Cullen said the danger wasn’t limited to particular parts of the Eurobodalla.

“Everywhere there is grass and bush unmanaged there is potential fuel,” he said.

Eurobodalla RFS units have been busy, with hazard reduction burns conducted whenever conditions have allowed. Some prescribed burns in the area have broken their containment lines but were quickly extinguished before they could endanger lives or property.

“We have been able to achieve a lot with strategic burns close to ridges and properties, and we have carried out mechanical hazard reductions with slashing equipment and the like,” Supt Cullen said.

The RFS has trained and worked hard to ensure it is prepared for the warmer months, but it needs the cooperation of the community to ensure disasters are kept to a minimum.

“We are always prepared to work alongside the community because fire issues are community issues,” Supt Cullen said.

“Eurobodalla residents need to prepare their properties for fires by keeping fire hazards as far away from houses and buildings as possible, and making sure their families have a bushfire survival plan where everyone knows what to do in an emergency.”

Supt Cullen said that Eurobodalla property owners could still get permits from their nearest RFS captain to carry out hazard reductions on their properties. Permits are mandatory from today.

The burn will treat 324 hectares located approximately eight kilometres west of Bermagui in the Coolagalite area.

•     Part of Nutleys Creek Road adjacent to the burn,

Mr Cope said the burn aimed to reduce fuels to lessen the intensity of unplanned fire events and the impact of wildfire on assets.

The weather was good with the fuels dryer than expected and the fire burnt slowly down the ridges overnight and continued on Tuesday.

National Parks had two crews continuing to finish off this burn and patrol and mop up the edge.

Next week, a high pressure system was due over the South Coast allowing firefighters to attempt to burn out the rest of the area by helicopter.

“The burn will also provide protection to koala habitat through low intensity fire achieving a mosaic of burned and un-burned areas in the forest which can act as refuges in the summer months,” Mr Cope said.

“Following our koala protection protocols, we surveyed for koalas six months prior and one week prior to this hazard reduction and found no evidence of koala in the areas where hazard reduction mosaic burning will occur.”

Motorists using the Nutleys Creek Road should expect some smoke and are reminded to drive to the conditions and watch for notification signs and other traffic directions.

The risk to properties during this burn is considered low, however to ensure your property is well prepared:

•     Ensure pets are secure within your property and have an area that provides protection for them.

•     Close all windows and remove washing from clothes lines.

•     Stay well clear of fire operations during the burn.

•     If you have asthma or a lung condition it is recommend that you stay inside or leave the area during the burn.

This hazard reduction activity is part of the NSW Government’s $62 million package to boost bushfire preparedness and just one of many being undertaken by NPWS across NSW, as conditions dry out.

During 2011-12, the National Parks and Wildlife Service completed 204 prescribed burns treating an area of nearly 50,000 hectares.