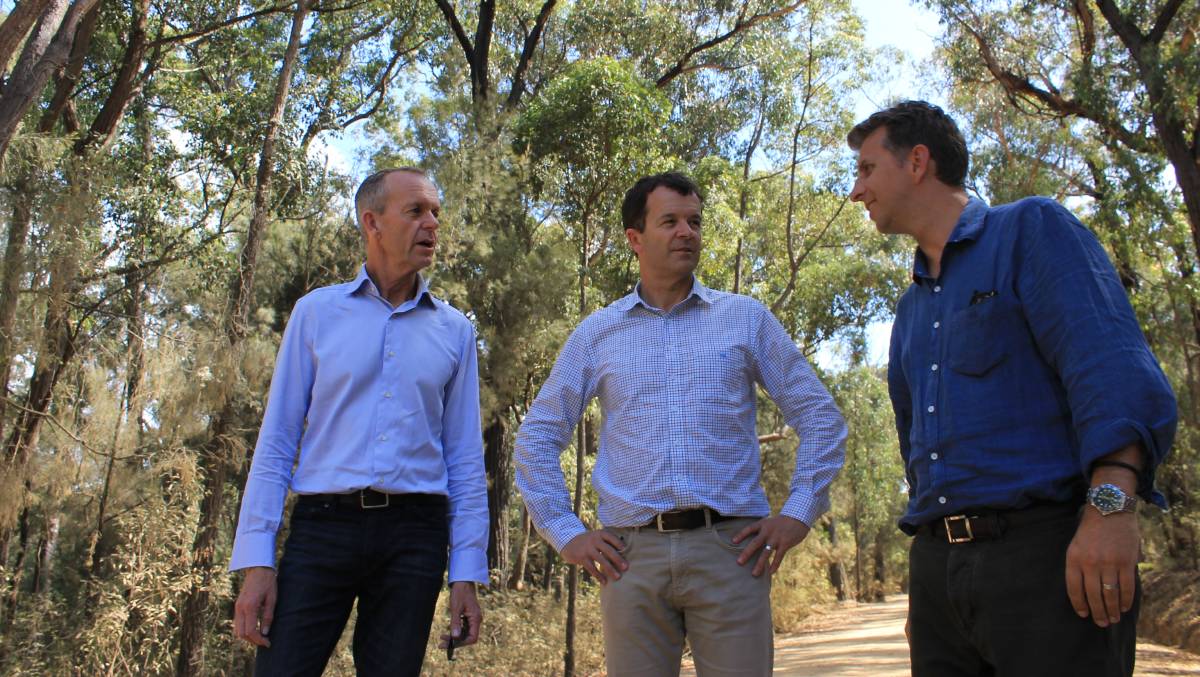 The majority of four state forests south of Bermagui will be converted to flora reserves, which have similar protections to national parks.

Greens and conservationists have welcomed the move but are concerned this will shift logging activity north placing extra pressure on State Forests around Narooma and Batemans Bay.

The announcement relates to the Murrah, Tanja and Mumbulla state forests will become reserves, as will the southern half of the Bermagui State Forest, totalling about 11,800ha of landscape.

The Forestry Corporation will retain ownership of these reserves, but they will be managed by the National Parks and Wildlife Service, with the conversion taking place in an attempt to protect the habitat of the last colony of koalas on the Far South Coast.

Only around 60 of the animals are estimated to remain in the forests.

On Tuesday, March 1, Member for Bega Andrew Constance and NSW Environment Minister Mark Speakman visited the Bermagui State Forest to announce the change, stating flora reserves provide a protection that was similar to national parks and cannot be revoked except by an Act of Parliament.

Mr Constance said the forests were converted to flora reserves – which cannot be logged – instead of national parks, so in the future the option of harvesting them again could be considered.

Mr Speakman said the timber that would have come from these regions for the Eden mill will instead be sourced from Batemans Bay Forestry Corporation zones, with $2.5million in subsidies provided by the Environmental Trust to assist this move.

“We’ve managed to have a win-win, protecting 25 threatened species and the habitat of the last population of koalas on the Far South Coast in a way that guarantees wood supply and local timber jobs in Eden,” he said.

“The local Aboriginal community will also be invited for their input in managing the flora reserves.”

Mr Constance said the Environmental Trust’s grant would protect jobs in the timber industry, which directly employs 278 people in the Bega Valley, and remove any uncertainty the industry had about wood supply in the southern region.

“We are better off using locally sourced wood than imported product,” he said.

“It means we can manage in an integrated way across the landscape,” he said.

“This is important for fire management, pest and weed management, as well as working to improve the habitat for the koala.”

Senior threatened species officer with the Office of Environment and Heritage Chris Allen said the koala population in the Far South Coast was small and widely scattered.

“[The conversion] is a good outcome for these forests,” he said.

The Greens welcomed the creation of flora reserves on the Far South Coast, but wanted the forests to become national parks to guarantee their protection

The Murrah, Mumbulla, Tanja and southern part of the Bermagui state forests were recently listed as flora reserves, but could still be logged in the future.

Also, candidate for Eden-Monaro Tamara Ryan was concerned timber that would have come from these regions will now come from the Batemans Bay area.

"Native forest logging is a dying industry, costing taxpayers more than $43million over the past three years.

“The Greens want to see money go to staffing and management of these new conservation areas, tourism projects and to assist in the buy-out of existing wood supply agreements like those with the Eden mill.

“Greens support a transition to sourcing timber from plantation forests like those around Cooma, which ensure not only our ecosystems and native habitats are safe, but also the continued jobs of those workers in the industry,” Ms Ryan said.

Greens MP and forestry spokesperson David Shoebridge said it was a significant win for forests, and it was as a direct result of years of campaigning by forest protectors, that 12,000 hectares of South Coast forests were going to receive protection.

The conservation of these forests means some of the last identified koala habitat in the South East Forests will be protected from logging, he said.

While the declaration of Flora Reserve provides some real protection under the Forestry Act, it does not provide the full protection required from mining, hunting and private development that should be granted to these forests under the National Parks Act, he said.

“The South East Forests are precious and flora reserves are a significant step to help ensuring their ongoing protection for the future,” Mr Shoebridge said.

“Let's be clear about this, this is a real win for nature and this crucial koala habitat in the South East Forests and it has only come about because of the long term activism of forest protectors.

“Unfortunately the only money on the table to manage this transition is $2.5 million to the logging industry, with no additional funding being provided to manage these new beautiful reserves.

“It's a fact that logging native state forests not only loses the state government money, but continues two centuries of unsustainable clearing of forests in this State.

“The Tanja, Mumbulla and Murrah State Forests are worth far more to the community standing than logged, and this is especially so given they contain some of the last identified koala colonies in the South East.

“There are far more jobs, and far more economic opportunities from activities such as tourism, forest adventure sports and regional walking trails, that can happen with intact forests, than the short term loss making from cutting them down.

“Credit needs to be given for this decision to the hard work of years of on the ground forestry campaigning, as well as both Ministers who have today recognized the value of these forests.

“This is a good first step, but only a first step. What is needed is a state wide commitment to end loss making native forest operations in all state forests and instead manage our forest reserves for long term environmental and economic benefits,” Mr Shoebridge said.

Forest campaigners have also welcomed the Government decision to create new Flora Reserves in coastal forests between Bermagui and Tathra.

Convenor of the Chipstop Campaign, Harriett Swift says that ending logging in these important forests makes environmental and economic sense.

“It can help save the koala and other threatened species and would save taxpayers money if it were not accompanied by ridiculous new haulage subsidies to the logging industry,” she said.

“Further logging of these forests would have made a loss and it would have saved taxpayers money to simply stop it.

“There is no reason for taxpayers to fork out another $2.5m in subsidies for log haulage to take logs to the Eden chipmill. “

“While other industries such as steel and motor vehicles have to sink or swim in the market place, there seems to be a magical force field around logging that protects it from market realities.”

“Logging of these coastal forests has been highly controversial with extended community blockades and protests at Bermagui, Murrah, Mumbulla and Tanja.”

“It is especially pleasing that Mumbulla, which is so important for the local Aboriginal community, will now be safe.

Mumbulla logging was found by a court to be illegal in 2011 because it was a gazetted Aboriginal Place.

“The logger contracted to the Eden chipmill there was compensated with $18,000 to stop logging. The Aboriginal community received no compensation for the damage done to their priceless heritage.”

Ms Swift said that logging proposed for Tanja was deferred twice because of community protests and the discovery of koalas.

“At one time the woodchip yield was even increased by 20 per cent to compensate for wood lost because of the moratorium in Bermagui, Murrah and Mumbulla.”

Ms Swift said “while we would prefer to see the forests receive the strongest protection as a National Park, the creation of Flora Reserves is a wonderful first step.

“The downsides of this decision are further subsidies to the industry and more intensive logging in forests to the north. These are significant and unnecessary costs.”

“The forest campaign will continue until all native forest in the region is stopped,” Ms Swift said.