Monday, February 15: It was a beautiful day to play 4BBBB. R1 of 3 Stableford. 44 players competed and our worthy winners were Kay Lawrence and Di Wilkes who had a great score of 44. Balls to 37 OCB. Wednesday February 17 was a fun day. Captain v President match play with 34 players. The President's team had the win with 7 points to the Captain's 6. Balls were awarded to the winning team players and to the teams that had a draw. 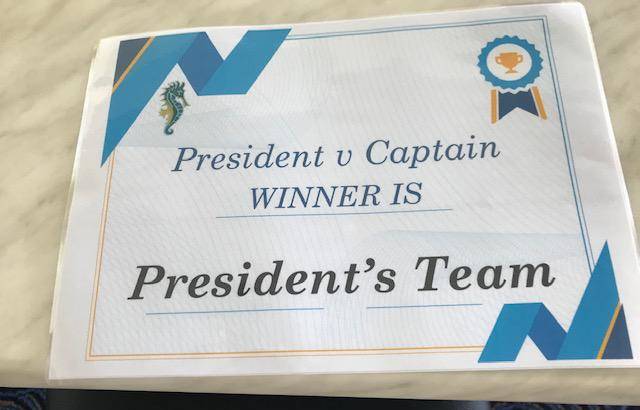 Thursday, February 18: The series of large fields continued as 151 players enjoyed excellent conditions. In A Grade Tim Sykes posted his best-ever round of 3-over-par in scoring 42 points off his handicap of 9, followed by Mitch Jeffery and Laurie Holmes on 40 and 38 points respectively. Frank Jakubowski took out B Grade, albeit on countback, in registering 39 points off his handicap of 20 ahead of Robert Hudson. Chris Goldsmith took third place with 38 points. In C Grade Jim Hoar prevailed with 39 points off his handicap of 27, with Peter Jones and Wayne Rollings in the minor placings with 38 and 37 points respectively. The nearest-the-pin winners were Neil Towers on 3, Ian Miller on 9, Frank Jakubowski on 14 and Mick Alleyne from Moore Park on 17, while the ball competition went down to 32 points with 18 on the way home.

Saturday, February 20: A field of 157 players made the most of the late February weather conditions in the first round of the Annual Par competition. In A Grade Bill Durnan finally returned to the victory dais with plus 3 off his handicap of 6. Steve Wyatt from Bermagui was favoured by the countback on plus 2 to take second spot ahead of Peter Ward with Bill Hannam missing out. Bruce Day took out B Grade with plus 4 off his handicap of 20 on countback from Ron Bezzina, while Mark Westwood filled the third position with plus 3 on countback from Neil Robertson. In C Grade Robert Brown came out on top with plus 4 off his handicap of 25 on countback from Gil Mott, with Tony Hunt in third place on plus 3. The nearest-the-pin winners were Brendan Warby on both 3 and 14, Gary Hunt on 9 and Kyle Dixon on 17, while the ball competition went down to minus 2 with square on the way home. RGI Monday's usual fine and windy conditions had 28 players organised to a tee by Billy C which saw secret ends as the game decider for the winners on 16 in Snoopy Leigh, Top-card Ace and Emberley Footprint from the runners-up on 13 in Nod-back Helmore, gospeller Bob and Steal Hotdaughter. Bob scored the first resting toucher but the $253 jackpot did not go off nor did anyone put their hand up as a wrong bias sinner. The lucky losing team on rink 8 was Chris Silver- Jones, Pom Kennedy and Towelling Lewis while the raffle prizes went to Duffer Jones, Snoopy (twice thankfully sending it round again for) John Pink-lady. Once again the Goose was looking after his co-pilot so book results only for Thursday bowlers where the highest winning margin decided the match winners on an unbelievable 3-way countback on 2 in Chef Keith, Cobber Peter and Punter Alan from the runners-up in Snoopy Leigh, Mayoress Olwyn and our Macedonian Illya. The first resting toucher went to Hi-ain't Mac or Greg but the $100 jackpot stayed in the bag. The wrong bias sinners lived for another day and raffle winners stayed in the machine.

Over this past week there were three days of Narooma Club Croquet competition, with Monday morning golf croquet being played for the first time. This was a sort of unofficial pennant fixture whereby Johnny Cairns (and his parrot) from Manly Club prevailed with a slim winning margin in two doubles matches against the local pairing, but was defeated narrowly in a singles match by improving player Paul Chenoveth. In Thursday's golf croquet competition Cathy Sforcina (former novice player) shone out in game 7 when she scored two one-shot hoops - with the red ball at hoop 7 and with the yellow ball at hoop 12 - to win her first singles golf croquet match. In the association croquet on Saturday morning Janet Jones and Pauline Wilcock were convincing winners in their respective matches. 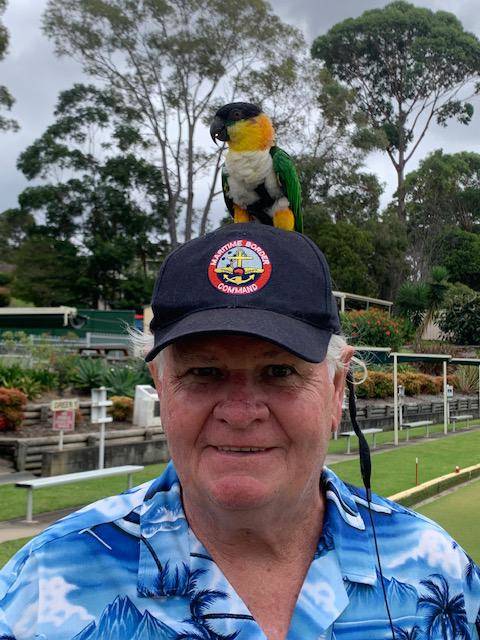 Johnny Cairns and his parrot, visitors to Narooma from Manly Croquet Club. 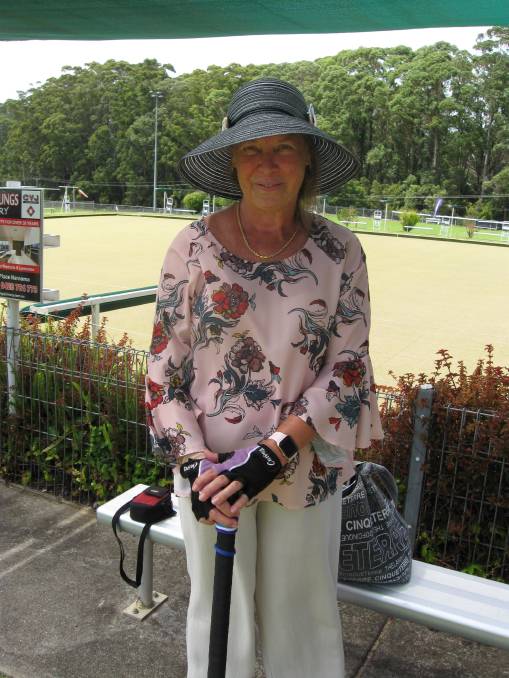 Cathy Sforcina after her first win in a singles golf croquet match in game 7 of golf croquet. 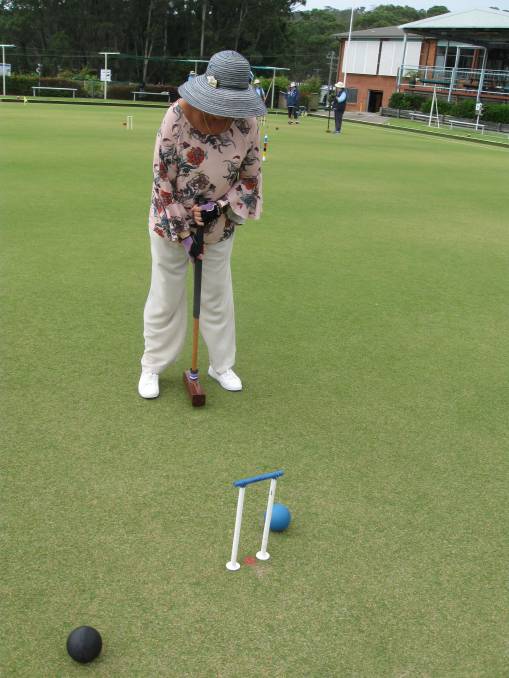 Cathy Sforcina plays the blue ball to hoop 1 in game 4 of golf croquet. 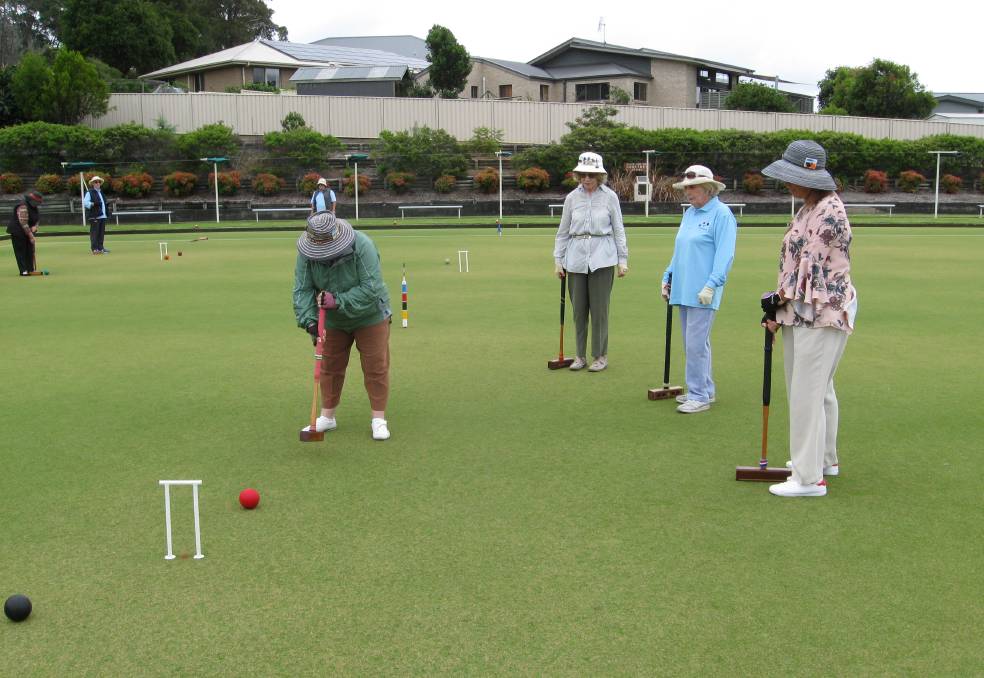 Club Captain Christine Stent, on the march in golf croquet, plays the red ball to hoop 6 in game 1, watched by partner Louise Starkie and opponents Pearl Hanson and Cathy Sforcina

Thursday, February 18: Under weather conditions of clearing light showers followed by a hot sunny morning, seven matches of golf croquet were played on Green No 1. Most of the matches ended in tight finishes with only one or two points finally separating the competitors. In game 3, contested by Paul Chenoveth and Len Favier, a tie-breaking thirteenth hoop was required to break the deadlocked scores of six all after the twelfth hoop. Of the ten players competing, Christine Stent topped the rankings, figuring in two wins and an average of 7 points per game, followed by Louise Starkie also figuring in two wins and an average of 6 points per game, with Len Favier in third place with one win and an average of 61/2 points per game. Also novice player Mary Ryan figured in a good doubles win when partnering Janet Jones. It was a disappointing start for our No.5 pennant team going down 9/1 to Tuross at home. Details of all matches were as follows: Game 1 - Christine Stent and Louise Starkie 7 def Cathy Sforcina and Pearl Hanson 3 Game 2 - Janet Jones and Mary Ryan 7 def Fay O'Connor and Sally McGourty 5. Game 3 - Paul Chenoveth 7 def Len Favier 6. Game 4 - Louise Starkie 7 def Cathy Sforcina 4. Game 5 - Christine Stent and Pearl Hanson 7 def Janet Jones and Sally McGourty 5. Game 6 - Len Favier 7 def Paul Chenoveth and Fay O'Connor 5. Game 7 - Cathy Sforcina 7 def Louise Starkie 5.

Last Tuesday's social bowlers enjoyed four games of triples on a morning which was cool at times, then warm and humid. 'Lucky rinks' was drawn to select the day's winners and first prize money went to Lorraine Mitchell, Sue Wales and Jenny Coulson (skip), all in good form against Lorraine Mitchell (swinging lead), Coral Read and Marg Naylor (skip). Second place won by Sue Sansom, Sue Bender and Robyn Hazelgrove (skip) from Thirroul after their close finishing game against Gayle Marchant, Anne Nicholls (Thirroul) and Gail Palmer (skip). Minor Singles: The final between Julie Smith and Cindy Newell was a hard fought game. The lead changed a number of times as each player gained an advantage. After twenty ends scores were level on 16. Both ladies won four more ends each with only one shot the difference. A few long measures on the twenty-eighth end gave Cindy the final advantage to win the match. Congratulations to Cindy Newell Minor Singles champion for 2021 and to runner-up Julie Smith.

Social Bowls Winners' Circle: It was a great day for bowls on Wednesday with 54 bowlers making up nine rinks of triples. Winners were decided by Highest Winning Score and this week the winners were Lester Chapman, Mark Marchant and Peter Spillane who carried over their great form from last week to lead throughout to defeat Tony Gill, John Morgan and Terry Myers. Second place went to Les Waldock, Peter Murton and John Scott who showed top form against Vince Stocks, John Spees and Jeremy Seaton. On Saturday we had three rinks in action with winners decided by Lucky Rink. First place went to John Nicholls and Neville Mitchell with a 15 to 14 win against Jeff McCusker and Greg Maloney. Second place went to Mick Cavic and Dennis Maggs who led 16 to eight after 11 ends and continued attacking the jack to run out 29 to 14 winners Vince Stocks and Tiger Fryer. 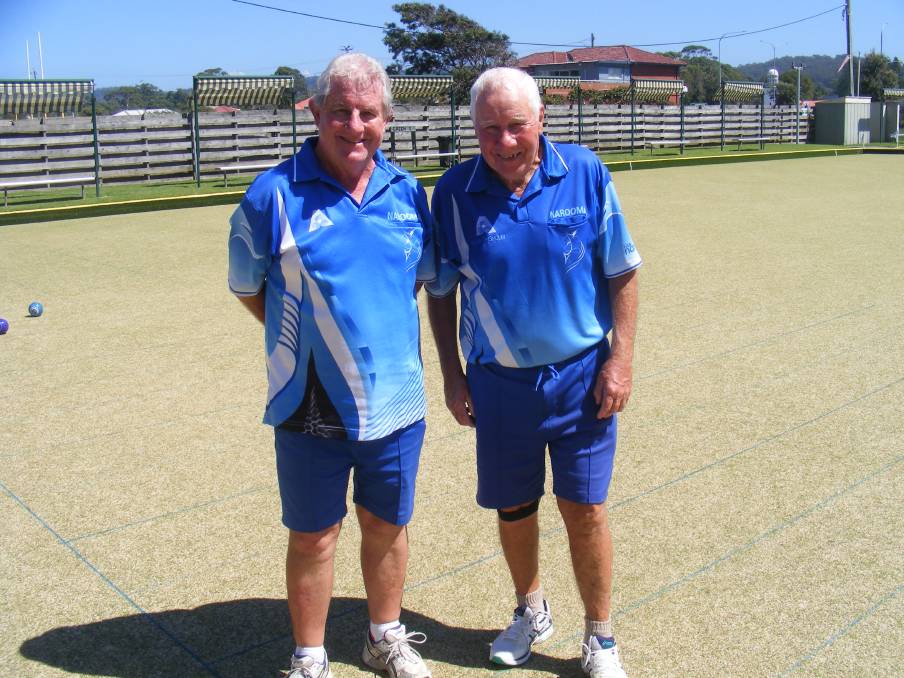 The winner of the Narooma Consistency Singles Championship, Garry Carberry, is congratulated by runner up, Allan Chisholm.

On Sunday we had 22 bowlers for two rinks of triples and two games of pairs. Winners were decided by Lucky Rinks and first place went to Sue Wales and Darrell Goodridge (skip) who led 14 to 10 after 13 ends and played strongly in the second half to take their match 24 to 13 win against Coral Read and Cindy Newell (skip). Second place went to Pat Wood, Merrie Downie/Sue Bender and John Downie (skip) who played well to lead all the way against Garry South, Paul Read and Pam Grant (skip).

Major Pairs: The following Major Pairs games were played over the weekend. Graham Cummins and Dennis Maggs (skip) who had a great match, with scores level at 12 all after 13 ends before they drew clear for a 21 to 15 win against Peter Hawker and Kevin Callaway (skip). Peter Dillon and Greg Ryan (skip) led 14 to six after 11 ends and they went on to a 20 to 11 win against a valiant effort from Mick Cavic and John Redman (skip). Peter Robson and Dave Herman (skip) were down eight to 12 after 10 ends and 14 to 17 after 17 ends before they rallied to grab their match 19 to 18.

Our Grade 6 team were in great form away to Malua Bay where they won 9 points to one, two matches to one and 67 shots to 58. Results were - Paul Read, Graham Cummins, Greg Riley and Kevin Mitchell (skip) lost 18 to 24; Neville Butt, Allan Chisholm, Peter Dillon and Peter Jones (skip) won 260to 17; and Darrell Goodridge, Gary Murane, John McNamara and John Downie (skip) won 26 to 17.

Saturday February 20: Blue skies and a hot, sunny day greeted the contestants on Saturday morning for the regular association croquet competition. Four players contested two singles, level handicap matches with the following results. Game 1 - Janet Jones was all smiles in maintaining her recent, almost perfect form to score the maximum of 26 points and defeat Len Favier on 8 points. Game 2 - Pauline Wilcock was all business in pressing to maintain a lead over Pearl Hanson, with Pauline making a late charge to amass 20 points at the time limit, and so defeat Pearl on 7 points. Schedule of Competition Matches (on Green No 1 at Dalmeny):

Monday February 22: An extra day of croquet competition will continue, start time 9:30 am, replacing the Wednesday twilight schedule. Also on the same day, in the afternoon, Club Captain Christine Stent will conduct training sessions for new and novice players where requested. Thursday 25 February 2021 - Golf Croquet at 9:00 am to 11:45 am. Saturday 27 February January 2021 - Association Croquet, 9:00 am to 11:45 am. Bookings for Golf Croquet - Fay O'Connor, telephone 0421 352 527. Association Croquet - Christine Stent, telephone 4476 3506.

A reminder to all members that the Narooma Croquet Club General Meeting will be held on Thursday February 25 at 1pm at Dalmeny Club following the scheduled golf croquet competition.