The highlight of the week in croquet competition on the greens at Club Dalmeny was the clash of the 'Amazons' of Narooma croquet, namely, Pauline Wilcock and Janet Jones, in an association croquet match last Saturday morning on court 1. As expected the match was close all the way, during which Pauline Wilcock achieved a personal best performance of a break of eight hoops in a row, from hoop 2 to hoop 9. Not to be outdone Janet Jones played some scintillating croquet herself to eventually win, scoring the maximum of 26 points with Pauline just behind on 24 points. It was a fantastic match all round. 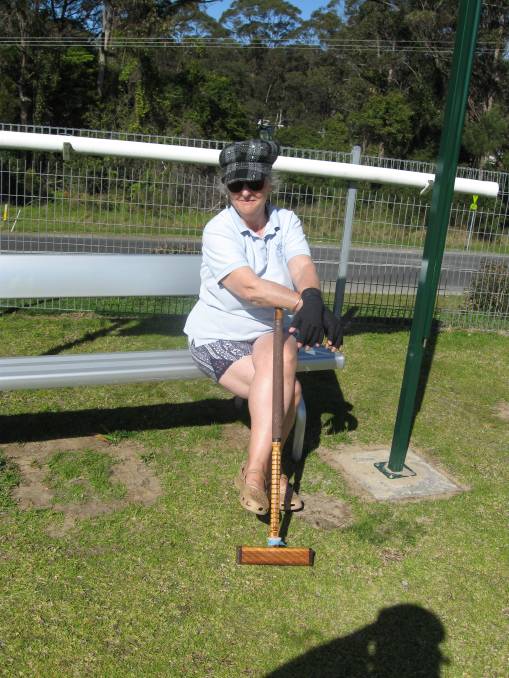 Otherwise Narooma Croquet Club conducted three days of competition last week at Club Dalmeny in sunny weather and on fast running greens. Competition comprised golf croquet on Monday and Thursday, and on Saturday, two matches of the association croquet regular competition. Player attendance was a high 14 of the total membership of 18 members. Performances on all three days were fairly even with results on Monday being reversed on Thursday.

On Monday morning of last week six players contested four matches of golf croquet on court 1 at Dalmeny. Deb McKellar (Deb having a clear win over the classy Dianne Sims) and Christine Stent were equal best, with two wins each. Match details were:-

On Thursday morning of last week a big group of 11 players contested seven matches of golf croquet. Dianne Sims and Louise Starkie reversed their losses of Monday and were equal top players with two wins and a high average points scored. Janet Jones, also with two wins, ruined her average with one narrow loss.

In game 7 at hoop 2 Len Favier played the brown ball to score a long and spectacular hoop, only to fall away during the rest of the game and lose 3-7 to Fay O'Connor, even though Fay was hampered by back strain.

On the morning on last Saturday two matches of the regular competition of association croquet were played.

As outlined in the week's highlights, in the match between the two highly ranked players, Janet Jones defeated Pauline Wilcock 26 points to 24 points.

Meanwhile, on court 2, Len Favier played against Pearl Hanson. Len led by only one point during the match, but then managed to scramble a couple of extra points near the end to win on 12 points to 8 points by Pearl Hanson.

Players of the week

Having achieved a personal best of a break of eight hoops in association croquet, Pauline Wilcock was the obvious choice for player of the week and thus was awarded the 'Blue Cow Award'. Deb McKellar was awarded the 'Pink Pig Award', having been unbeaten over games played. Janet Jones received an honourable mention for wins in both association croquet and golf croquet.

On a bye for the week were four players, namely, Heather McGourty (work commitments), Paul Chenoweth and Cathy Sforcina (resting after a long journey and rehabilitation) and Jenny Nagle (unavailable). In addition Aurelia Robinson and Bill Koerber were still interstate.

For the week beginning on Monday, August 16 there will be no croquet on the courts at Club Dalmeny due to the one week COVID-19 lockdown in NSW state.

Members please be advised that when the COVID-19 lockdown in NSW is lifted the process of booking attendance at croquet matches is required to avert further risk of the COVID-19 infection, as follows:-

Again the weather gods provided excellent golfing conditions on Thursday for the field of 134 players where A Grade was won by Andrew Voormeulen with 38points off his handicap of 12 to head Garry Hunt by one point while Ben Ritchie took third place with 35 points on a countback from Geoff Lanham and Robert Sayers.

In B Grade the consistent Bob Piper prevailed with39 points off his handicap of 16, albeit on countback from Chris Eardley with Nigel Roberts in third place on 38 points, also on countback from John Murray. In C Grade Kyle Dixon registered clearly the best score of the day with 43 points off his handicap of 25, a round which included 26 points on the back nine. Ian Harris and Bruce Day filled the minor positions on 38 and 36 points respectively. The NTP winners were Tony Ings on 3, Paul Lefel on both 9 and 17, and Perry Pericleous on 14, while the ball competition went down to Allan Lynch, the first of the 32 points.

A field of 130 players teed off for the August Monthly Medal in splendid conditions on Saturday. A Grade saw some good scoring when Steve Wyatt parred the course off his handicap of 3 to post 69 net to win on countback from Scott Kerr who went round in two-under-par off his handicap of 1. Murray Walpole finished third on 71 net. Mark Falconer registered the best score of the day with 68 net to take out B Grade as well as the Monthly medal with Mark Westwood in second place on 70 net. Scott Kennedy filled third position in a four-way countback on 71 net ahead of Liam Sulley from St George's Basin, Frank Jakubowski and Hal Fraser. In C Grade Peter Bashford came out on top with 69 net off his handicap of 21,while Antonio Tozzi and Tony Reid filled the minor positions on 70 and 71 net respectively. The NTP winners were Paul Lefel on 3, Graham Kerr on 9,Jackson Taylor on 14 and Scott Ker on 17, while the ball competition went down as far as Chris Ritchie on a countback on 77 net. RGI

Last Monday, 31 ladies competed in a medley stableford event Death by Chocolate, in cooler weather conditions after such a great weekend.

A grade winners were Dorelle Monteith with 34 points OCB to Marion Brooks and Nicole Harris.

A cloudless sky and the usual varying wind set the scene for the 32 bowlers scraped together by T Drayleft and the points system decided the winners on 201/2 in Graham or Brett and Laughing Lloyd Raise-them from the runners-up on 191/2 in Nod-back Why-lair and Garry L-Rentacar. Brett or Graham scored the first resting toucher and the $112 jackpot again stayed in the bag while the lucky losers on rink 6 were Top-card Ace and the sons of Can and Tom in Pete and Danny. The two wrong bias sinners were the Ian O-N and the Macedonian Illya while the winning raffle tickets dealt out by Browny went to Himself, of course, Pom Kennedy and B-Harold Lymbery .

Another fine and breezy day for the 27 Thursday bowlers scraped up again by a swinging VP Doug with the lowest winning margin deciding the winners on 2 for Dine-back Bravener, T Drayleft and the Macedonian Illya from the runners-up on four in Doug, Snoopy Leigh and Brett or Off-white Pork. Our Pat, Ron Harold or Jim scored the first resting toucher while the $312 jackpot didn't go off. The wrong bias jar was back in use with donations by gospeller Bob, VP Dig and newly joined Bryan First-man Thwaite, whose spouse Leanne enjoyed showing us her skills. The winning raffle tickets were sold to Browny, first man Thwaite in his first raffle and Cheryl Badrim.

The semi-final round of the mixed pairs Championship will have to wait until after the state lock-down is over and sadly as will our bowls for the next week, at least, so it's goodnight from me and goodnight from the Goose who was last seen reportedly flying overseas.

Members best wishes to Jenny Coulson, celebrating her birthday on Saturday. Willy Blink was the lucky 50Club winner, Pam Grant won the meat raffle, thanks to Rapley's Plaza Meats for their suppport.

Unfortunately, the story is paused for the time being due to Covid concerns, Stay safe everyone, until next time.